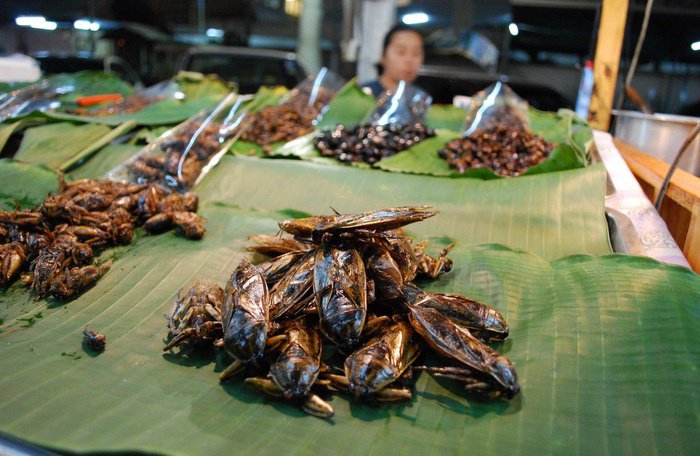 PHUKET: If I found a bamboo grub in my tom yum rum and coke, I would either assume the health office hadn’t been through that particular bar in Phuket in a long time, or my bartender was adding some Isaan flare to an already Thai-style cocktail.

As it turns out – health code concerns aside – it might just mean that the mixologist behind the counter is living life on the edge of the boozing world.

Enter World Class UK Bartender Of The Year 2015 and Bar Manager of Hawksmoor Spitalfields Ali Reynolds, who is serving up ‘Anty-Figmatic’ at bartending competitions. The drink itself is vodka based with Cacao Blanc, a pinch of citric acid and 10ml of ants, infused with fig leaf syrup.

“I very much wanted to find an alternative source for acidity in drinks instead of using the classic lemon and lime,” Mr Reynolds explains to the Telegraph. “The formic acid in the ants provided a wonderful sour and bitter orange flavor. As a whole they open consumers’ minds to the fact that we can get very interesting flavors from more than just fruits, herbs and spices.”

It’s easy to try and write Mr Reynolds off as being just a bit buggy in the head. However, he’s joined by a number of other mixologists looking to bring new flavors and experiences to customers’ cocktails.

According to a 2013 report by the UN Food and Agriculture Organization (FAO), there are between 300 to 550 species of edible insects scurrying about in Mexico, which can provide a realistic, sustainable and healthy alternative to cows, chickens and pigs. Insects, they say, could be the potential answer to the ever-growing issue of food scarcity.

This little bit of information is what inspired New Yorkers’ Julia Plevin and Lucy Knops to create Critter Bitters, cocktail bitters made with roasted crickets, reported the Telegraph. Ms Plevin and Ms Knops came up with the concept while studying design together at The School of Visual Arts after they were handed the 2013 UN FAO report and charged with designing a product that overcame the insect ‘ick’ factor.

“We realized that people are more adventurous with ingredients when it comes to drinking cocktails and we wanted a way to make crickets resonate with the community here in NYC,” Ms Plevin says.

“Critter Bitters are a conversation starter to get people talking and thinking about the situation of food in the world as the population grows and our resources dwindle.

“The crickets add a nutty flavor to cocktails. They bring something extra in taste – no other ingredient has the unique flavor profile of cricket.”

All that being taken into account – as well as the fact that since the 1940s bugs have found their way into bottles of mezcal and scorpions can be found drowned in one form of alcohol or another in countries neighboring Thailand – it might be best to double-check with your bartender that the cockroach in your cocktail is supposed to be there.

Planting seeds to grow a community