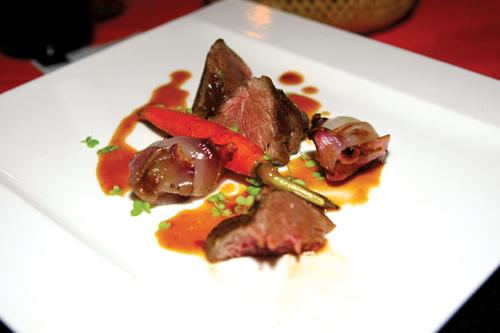 PHUKET: In the three months since it opened, the NINE Wine Bar and Bistro, tucked away in a cozy corner at the Royal Place, has brought a fresh new dining treat to Phuket.

For those of you who fly past the Tesco Lotus intersection to enter the bypass road speedway, try and slow down a bit and you’ll see the entrance to the Royal Place, a high end condo and commercial project, which is quickly becoming the center of Phuket City’s uptown.

The NINE is the type of restaurant you’ll find in Bangkok’s better upscale hotels.

Chic interiors mixed with a big cocktail and wine list and an international assortment of cuisine. It’s a great place for the island’s emerging sophisticated smart casual set. It opens at 10am and closes late at night.

The menu has been created by a team of Thai food experts, including Chef Songwut “Sean” Sumala who was named Thailand’s top chef in the Thai IRON Chef competition at the end of January, where he was featured on Thai television Channel 7.

Chef Sean trained in Sydney and worked at the notable Salt Restaurant for a number of years, before returning to Thailand to act as executive chef for Centre Hotel in the capital’s Chinatown district.

“For NINE, I have designed a menu that has many influences. I call the cuisine, contemporary, modern food, with influences from my kitchen experience in Australia. There are many cultures in Sydney, each bringing their own influence to the dining table. I have brought these to NINE for Phuket residents and visitors to enjoy.”

In addition to a full menu that is evenly divided between Thai and European tastes, Chef Sean, creates a NINE degustation menu each month, a five-course culinary experience, which shows off his talents in the kitchen. This degustation menu changes and is modestly priced at just 999 baht.

To give a sample of how he mixes flavors and concepts, the recent special menu started with the freshest fine de Claire oysters, flown from France and still alive when they arrive at the NINE kitchen. My dining partner said he could taste the Atlantic Ocean as the oyster slid around his mouth.

Chef Sean then offered a tuna tartar with soy glaze and two varieties of luscious caviar highlighted with real gold leaf as a starter. He also provided grilled calamari, which resembled a small young octopus garnished with cherry tomato and a garlic crumb.

The menu got off to a roaring start and was calmed by a soft and sensuous broad bean puree with tasty bits of real crab meat for added flavor. The pace of the meal again raced ahead with a delectable duck confit salad, which once more showed off the chef’s talent for creating impeccable French cuisine.

Portions were modest but generous and prepared the diner for a choice of main course. On offer were either succulent grilled lamb loin or large pieces of mixed seafood marinated in Provencal sauce. Strawberry gelato for dessert left the palate fresh.

“Our menu is broad and international but we prefer to give a focus to fresh seafood as we are on an island surrounded by a great wealth of choice of tastes from the sea,” said Visut Rattanakul, one of NINE’s owners.

There’s a substantial wine list logically ordered by price. A diner can decide on their wine budget for a meal and then find an international selection in that section.

The main European menu features grilled snow fish, roasted rack of lamb, grilled rock lobster and grilled sea bass with mango salsa, each for under 400 baht. There’s a wide choice of pizza and pasta for 219 baht and a nice menu of intriguing paninis and sandwiches. Most of the traditional Thai dishes are priced at 99 baht making NINE an affordable stop for lunch.

While the dining experience exceeds what is normally available around Phuket Town, just sitting in the comfort and beauty of NINE’s designer interior is a treat. Black and orange colors with Sino-Portuguese tiles and design motifs, give this restaurant a real Phuket feeling. Even the bathrooms provide for a happy surprise.

I asked Jiragun Wongtunsi, NINE’s manager how they chose the name.

“Well”, he said, “Nine is a lucky number for Thais. But more importantly, we wanted to honor our King, who is the ninth King of the Chakri dynasty.”