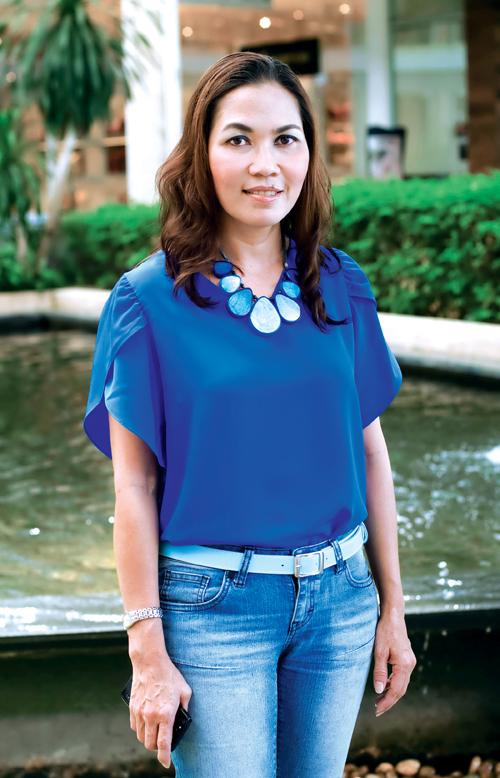 PHUKET: At the photo session prior to our interview, Prapa Hemmin looks dazzling in an electric blue dress and matching necklace. Still, she apologizes, “Sorry if I don’t look my best today. I am in the middle of an important project, the nature of which keeps me awake at night and the fatigue is ruining my complexion.”

As Director of Sales of MICE & Corporate Events for Laguna Phuket, the island’s premier resort on Bang Tao Beach, Prapa has reason to be anxious about her work.

MICE – short for Meetings, Incentives, Conferences and Exhibitions – forms the core of the tourism industry’s corporate sector and brings thousands of travelers to Phuket each year.

Last year alone, Prapa remembers, Laguna Phuket was host to no less than 15,000 such tourists.

Holding an MBA from Ramkhamhaeng University, Prapa has been with Laguna Phuket for 19 years of its 25-year lifespan. She laments the fact that Phuket is sorely lacking a suitably large and purpose-built conference hall to meet the rising demand in the MICE sector.

“Phuket is a veritable MICE city. We have all available facilities, such as great hotels, an international airport, beautiful scenery. But, we still don’t have a large exhibition hall like in Bangkok (Muangthon Thani) and Pattaya (PEACH Exhibition Hall at the Royal Cliff Hotel).

The government should rethink the plan to build such a space in Phuket because it will only help benefit the town,” says Prapa, referring to the government proposed, but eventually shelved, plan to build a convention and exhibition center in Phuket.

So while still waiting for that to happen, Prapa enjoys her multifaceted work experience at Laguna. Talking about the Phuket Triathlon, the most famous sporting event organized yearly by Laguna, and sponsored by the Phuket Gazette, her eyes light up in excitement. She was there during its inception ten years ago when participants numbered around 300. Last year, the number of athletes taking part rose to 1,200.

“I am very proud to be part of the Laguna Triathlon,” says Prapa. “Not only is the job exciting but I also get to rub shoulders with top sports personalities worldwide. I remember well the Triathlon champion Belinda Granger who’s always friendly. Local athletes, too, have made an impression and some have become good friends. Every year, I look forward to these ‘reunions’.”

As a hard-working professional, Prapa admits to having one flaw; she cannot let go of work and at times brings her worries home. This is when her husband steps in. His happy-go-lucky attitude and advice help her put things into perspective. “He’s my confidant without whom I’d feel quite lost,” says Prapa of her husband, who works as a bank manager in Kamala.

Family is important to Prapa, who is a proud mother of two sons (16 and 13). She spends a good amount of her free time supporting them at their weekend football matches. “I am decidedly a football mum. My younger son is in the Phuket Youth Football Team and they came top in the southern regional league last year. My eldest son is also in his school’s football team,” she says proudly.

As the whole family are Manchester United fans, Prapa and her husband will be taking their the boys to see their favorite club playing a Singha All Star XI in Bangkok this coming July.

When she’s not working, Prapa loves spa treatments, shopping for clothes and accessories. “I am a very sabai (relaxed) sort of person but I must look my best whenever I am out or at work. A good image gives me confidence and also instills it in my clients.”

The stork and the snail