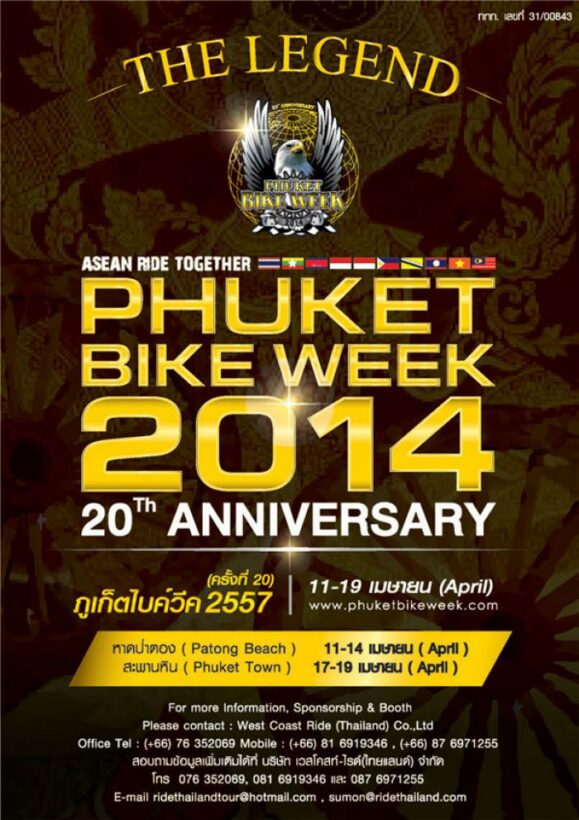 PHUKET: Just in time for Songkran comes this year’s Phuket Bike Week 2014. Celebrating its 20th year, the event is expected to attract huge crowds of “rolling thunder” for the six days of festivities in Patong and Phuket Town.

The first four days of the event will be hosted at Loma Park in Patong, from April 11-14. Activities will include a custom bikes competition, Miss Phuket Bike Week competition, tattoo competition, American cars show, plenty of music and partying and other activities and entertainment.

The two-wheeled party will make its way over to Saphan Hin, Phuket Town, on April 18 and 19 for a safe riding demonstration, speeches by Governor Maitri Inthusut and the Phuket Big Bike Club, the final round of the custom bike competition and Miss Phuket Bike Week competition and, of course, more music and beach parties.

Want to participate but don’t have a big bike? Phuket Big Bike Week offers resources to help you find a bike to buy or rent as well as other resources which can be found on their website.

A plethora of bikes from the big names and artfully created custom setups will be represented. In 2010, Phuket Bike Week hosted 2,800 bikes, and more than 30,000 visitors representing 26 countries which generated a reported 700 million baht in revenue.

For more information, including a schedule of events, visit phuketbikeweek.com

Phuket Books: Against the machine