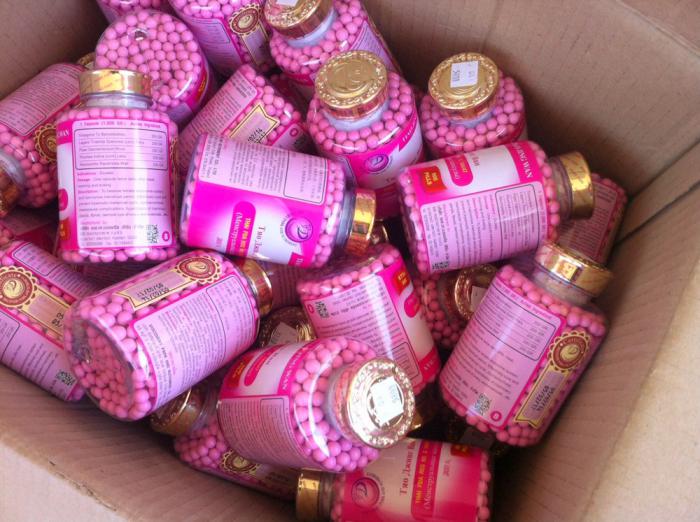 PHUKET: Illegal hormone drugs worth about 10 million baht targeted at the Chinese tourist market were seized by Department of Special Investigation (DSI) and Food and Drug Administration (FDA) officers yesterday.

DSI officers declined to give details of the alleged effects of the traditional Chinese medicines, stating only that they were for “improved sexual performance”.

However, at least one drug, Tiao Jing Wan, regulates women’s menstrual cycles to help improve fertility; it also claims to ease complications of menopause, prevent hyperplasia of mammary glands (which can cause breast cancer) and cure endometriosis and ovarian cysts.

“We were informed by tourists and locals of fake drugs claiming to contain snake parts and other elements of traditional Chinese medicines being sold in Phuket,” said DSI Region 8 Director Udom Phetcharakut. “There were people dressed like pharmacists claiming that the drugs boost sexual performance.”

“There was no Thai language displayed on the drug containers, which is an infraction of FDA regulations. Also, the drugs had counterfeit FDA certifications,” Mr Udom said.

“The drugs did not contain all the ingredients they claimed to,” he noted.

“These drugs did have Thai language on them. However, their Thai FDA certifications were counterfeit,” he said.

The company owners were charged for selling traditional medicines without a license and for selling drugs that had not been FDA approved. These infractions can both carry a penalty of up to three months imprisonment, up to a 5,000 baht fine, or both.

“There are other places selling these kinds of drugs on the island, so we will continue our campaign,” Mr Udom said.

Ousted Pian back in the Phuket race for Patong mayor