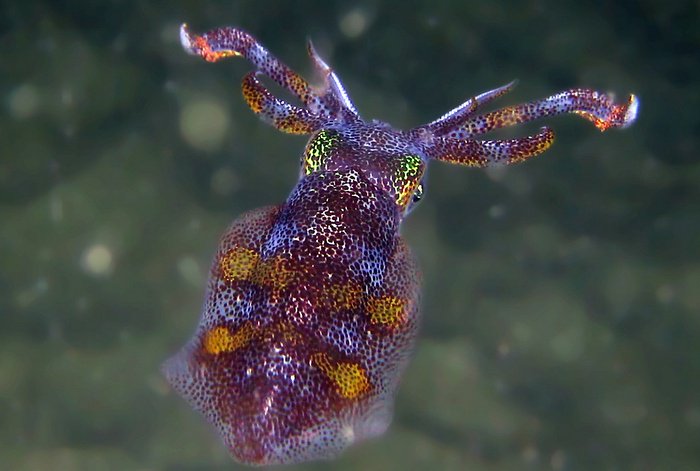 PHUKET: If you haven’t figured it out yet, you might not be at the bottom of the Mariana Trench, but you sure aren’t listening well – Kata Beach diving is amazing, and so are the night dives there.

Of course, it feels a little like bragging about going to a underground Rolling Stones’ show after the fact, but for those who will be coming to Phuket next high season, make sure to save a couple of nights for beach diving.

With the southwest monsoon season blowing in fast – much to surfers’ delight – the prime west-coast dive location will be too rough to dive most days and nights. Luckily, it was possible to sneak in one more full-on night dive with Vince of Kiwidiver.com to see which beautiful, unusual and delightful creatures could be found.

“Often, it’s easier to find critters and appreciate their wonderful colors in the more ‘pure’ focused light of the torches, without the overwhelming blue-green of sunlight. Colorful feather stars, for instance, are amazing to watch at night, whereas you’d often just swim past them on a day dive,” said Vince, who seems to spend just as much time nose deep in marine-animal identification books as he does in the water.

“Reefs come cracking and popping to life at night, so to sit and watch the heightened activity of life underwater can be an amazing experience.”

A heightened appreciation is one thing, but some of the animals that actually show up on the dive are the real selling points.

For unseasoned divers, there are a lot of ‘firsts’, even outside of the crustacean world, which rule the waters at night. Cuttlefish, sting rays, octopi, sleeping parrot fish and various species of moray eels are not too uncommon. Even for divers who have far surpassed the triple-digit mark, there can be a few opportunities for first sightings of robust ghost pipefish, ornate ghost pipefish, frog fish and bumblebee squid, as well as unusual nudibranchs and flatworms.

Related Posts  Keep it green: A big world on a small planet

Even more exiting are the fish that you can’t identify (see photo above). This long-chinned fish was camouflaged against a piece of mooring line out in the sand. It resembled some strange mix between a shrimpfish and robust ghost pipefish… Vince and I were stumped.

However, what next season will bring will remain a mystery, at least for the next few months. The Kata Beach dive site of the 2013-2014 season is different than the site of the season we are wrapping up now. What appears to be an increase in water pollution rolling in from the canal at the north end of the beach has changed the biological landscape. The seahorses, which were being spotted regularly out in the sand and the sea grass beds, were mostly gone by the middle of the season. In their place a number of different sea creatures, including a variety of sea cucumbers, crawled in.

“I would expect pollution levels to subside a little during this ‘low season’ and hope that more seahorses return at least for a while, until ‘high season’ tourist numbers cause pollution to increase again. There are annual patterns anyway, warm and cold water cycles and so on…so I would expect some new critters [compared to the last year or two],” said Vince.

Whatever it brings, a few nights spent away from the bars and on the Kata Beach dive site will be nights well spent with the kinds of creatures of the night that your significant other might approve of.