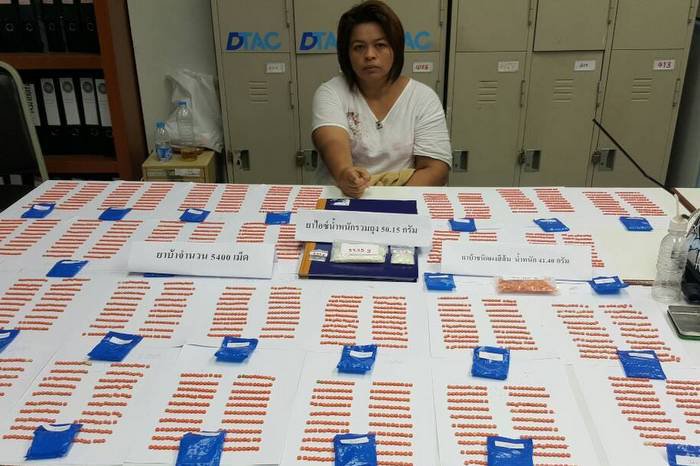 PHUKET: Police arrested a convicted drug dealer’s daughter on Saturday after she was found in possession of 5,400 ya bah (methamphetamine) pills, 41.50 grams of ya bah powder and more than 50g of ya ice (crystal methamphetamine).

Police had been keeping a close eye on Suphanan Chaichana, 30, after her father, Lep Chaichana, was arrested for selling drugs and sentenced to prison on March 9.

“We had been monitoring Ms Suphanan’s activities as we believed she was involved in the same drug network as her father,” Phuket Provincial Police Deputy Commander Pinit Sirichai told a press conference this morning.

“We finally made our move on Saturday after we had evidence that she was in possession of illegal drugs and dealing in Phuket Town.”

Police arrested Ms Suphanan at her rental room in Soi Maechit Uthit in Rassada, where they found 0.4g of ya ice and drug paraphernalia, as well as another 10.5g of ya ice hidden inside a helmet, said Col Pinit.

“Ms Suphanan confessed that the drugs belonged to her,” Col Pinit said. “After questioning, she told police that there were more drugs, which she claimed had belonged to her father, hidden inside a house in Pa Khlok.”

Ms Suphanan was charged with possession of a Category 1 drug with intent to sell.

“We are questioning Ms Suphanan to find out more information about her and her father’s drug network. We hope that this will lead to more arrests,” Col Pinit said.