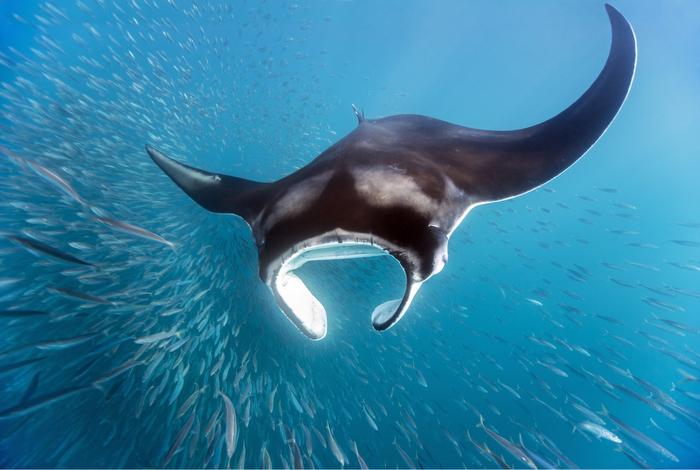 PHUKET: Phuket divers have been regularly asked to participate as citizen scientists over the last several years, helping ‘Spot The Leopard Shark’ to better understand shark populations and to collect data for ‘Project Seahorse’ as they determined the sustainability of fishing practices for seahorses in Thailand.

Now, a new project is afoot in the Kingdom, one destined to improve conservation efforts and our understanding of one of the most iconic fish in the sea: manta rays.

Oceanic and reef manta rays are on every diver’s bucket list. Their gracefulness as they effortlessly glide through the water and the intelligent curiosity in their gaze is captivating. And for those not instinctively drawn to the gentle giants, it should be noted that mantas generate more than 5 billion baht per year in ecotourism revenues worldwide.

In an effort to preserve their presence in Thai waters, the Manta Trust recently diversified their scope by adding a Thailand project to their global research campaign, which already has projects established in a number of countries, including Mexico, Fiji, Indonesia, the Maldives and the Philippines.

“We are only starting to learn about the population structure of oceanic manta rays. While they were previously considered highly migratory, recent research by Manta Trust scientists suggests that oceanic manta ray populations are also highly structured and vulnerable to local and regional impacts,” Manta Trust Assistant Director Josh Stewart explains to the Phuket Gazette.

“The Manta Trust regional projects don’t necessarily reflect individual manta populations, although that is the case in some regions. The structure of the organization is based more on our philosophy on how to affect meaningful conservation action for manta rays.”

The majority of threats to manta rays come from local impacts, such as targeted capture by fishermen and bycatch from gillnets, as well as ship strikes and local habitat degradation.

“We believe that these issues are best addressed by bottom-up, grassroots conservation efforts. So, our organization has local initiatives – typically with project leaders from the local communities – working on local-scale and regional-scale issues to support manta research and conservation,” Mr Stewart says.

Taking the reins in Thailand, after becoming involved with the Manta Ray Project in 2014, is Jamie Monmaneerat. Ms Monmaneerat first took the conservation spotlight when she was crowned Miss Marine Conservation and Miss Scuba International 2012-13 in Bali, and has since taken the title to heart.

“Currently, we have 70 plus individuals in our database,” explains Ms Monmaneerat, who is coordinating her efforts with Department of Fisheries and Department of Marine Coastal Resources. “Few manta rays in our database have been spotted several times over the year, which indicates that we do have a population that needs protection.”

The spots on the underside (ventral surface) of each manta ray are completely unique, much like finger prints, allowing scientists to establish accurate databases of populations. Because of these unique markings, divers are able to play a crucial role in data collection.

New and old photographs of the ventral surface, even if taken from a sharp angle, can be submitted through an online form at MantaTrust.org (here) or emailed to IdtheManta@mantatrust.org.

Additional information, such as when the manta was spotted, where it was spotted and what it was doing, as well as depth, visibility, water temperature and the current, all provide helpful clues for those crunching the numbers.

However, even if you only have a picture and a general location, such information can be extremely helpful as Thailand plays catch-up in better understanding its manta population, says Ms Monmaneerat.

“In terms of the big picture, Southeast Asia collectively is the largest supplier of manta and mobula gill plates, and fisheries represent a huge threat to regional manta populations. There are several major targeted fisheries for mantas and mobulas throughout Southeast Asia, and it’s not clear how populations are connected in this unique archipelago seascape, or how these populations are impacted by fisheries,” explains Mr Stewart.

“Understanding the movement patterns of manta rays allows researchers to determine where the species are most threatened by various impacts, such as targeted fisheries, bycatch or habitat degradation. Furthermore, low-cost, non-invasive research initiatives such as photo ID databases help to determine seasonal trends in site use and visitation, residency patterns, and identify-critical habitats, while at the same time involving the public and the local community in data collection efforts and raising awareness.”

Though manta rays are not targeted fish in Thailand, researchers have received reports of them being caught as bycatch, often due to illegal fishing practices, explains Ms Monmaneerat.

“Thailand is the second destination in Southeast Asia that divers choose to come and see these species,” Ms Monmaneerat explains. “However, while manta tourism generates millions of dollars for the country each year, there are still no national protective laws in place for these animals and wrong-method fisheries continue to threaten these species regionally. There is therefore an urgent need to collect data on these populations.”

However, there are already examples of manta research supporting policy changes elsewhere in the world, most notably Indonesia – now home to the world’s largest ‘manta sanctuary’.

“Tagging data collected by Manta Trust partners at the Misool Manta Project and Conservation International helped support the creation of the manta sanctuary by demonstrating that both species of mantas remain resident to Indonesian waters, making them a purely Indonesian resource,” says Mr Stewart. “This provided added incentive to protect the species within the country’s exclusive economic zone, as there was little threat of external fisheries having a significant impact on the Indonesian manta populations, which would negate local conservation efforts.”

The data collected by divers in this region as ‘manta season’ starts to take hold at popular dive locations around Phuket, such as the Similans, Hin Daeng and Hin Muang, could make a real difference in future conservation efforts, points out Ms Monmaneerat.

On Deck: Preparing to set sail with AEC