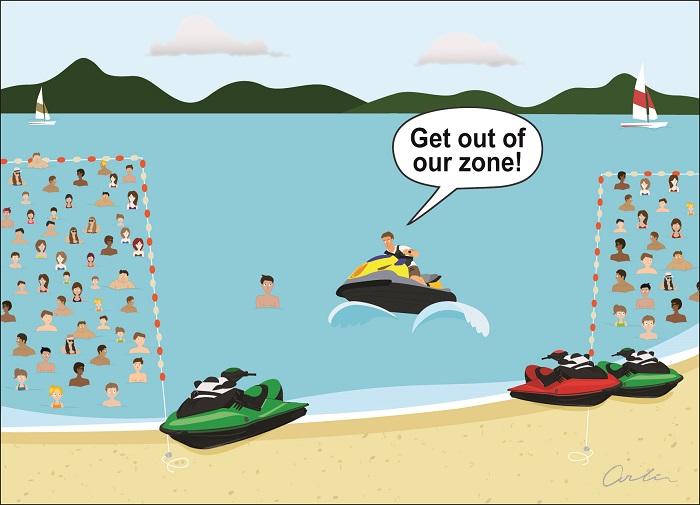 PHUKET: All stakeholders in Phuket’s future should thank five visiting ambassadors who kept the pressure on the provincial government to do something about the island’s notorious jet-ski rental industry.

As opined many times, this particular industry seems to possess a curious ability that allows it to somehow pass undetected through all barriers of law, order, courtesy and simple common sense.

It is illegal for anyone without a captain’s license to operate a jet-ski in Thailand. Simple enforcement of this law could restore peace and order overnight, yet those responsible for enforcement not only refrain from taking action, but also consistently refuse to admit that a problem even exists.

Multiple polls by the Gazette confirm that the vast majority of residents and tourists on the island would like to see these loud, dangerous and intrinsically obnoxious machines banned from local waters altogether.

Over the years, many tourists have lost their lives in jet-ski accidents. Many more have been injured or had their Phuket holiday experience completely ruined by the various extortion scams run by jet-ski rental operators – most notably those who make excessive demands for payment for minor or even non-existent damages to their vessels.

But these are just initial costs to the island. What also needs to be factored in are the numerous other ways this industry is ruining Phuket’s reputation as a safe, peaceful tourist destination.

For a start, anyone who enjoys swimming will inevitably hate having to be confined to the small swimming zones set up for them, so that jet-skis, parasailing speedboats and other vessels can rule the rest of the bay.

Anyone who has ever swum in the ‘open ocean’ and had a jet-ski approach at above-the-head level knows the true meaning of the words ‘raw fear’ and ‘helplessness’. No wonder beach tourists are increasingly opting for jet-ski free vacation destinations. As the visiting ambassadors correctly pointed out, jet-skis are hurting our tourism industry in a very big way.

Jet-skis are also an increasingly obvious eyesore on the beach landscape, where they continue to park and be touted despite the order by the National Council for Peace and Order (NCPO) that no party shall use public beaches to conduct private business.

Though many beach vendors have been forced off the sands and parts of popular beach clubs have been demolished, the jet-ski rental industry continues to flourish.

As has been mentioned numerous times in this space, The NCPO has done an admirable job at imposing some semblance of order on our beaches, affirming the sands’ status as public property.

This may be the last chance Phuket has to rid itself of jet-skis, so, at the risk of sounding like a broken record, we again call for an immediate island-wide ban on all jet-ski rentals – as well as an official investigation into the personal finances of public officials who have so brazenly allowed this dangerous and sad situation to fester.