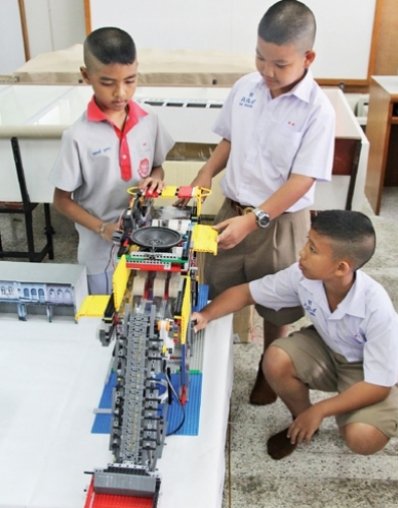 PHUKET: Three young boys from a government school in Phuket Town will fly to Abu Dhabi in the United Arab Emirates to compete in the World Robot Olympiad (WRO) 2011 in November.

The ingenious youngsters built a robot that actually picks up and disposes of trash. Their autobot, as per competition rules, was made from Lego bricks and other components (click here to see PGTV footage).

However, the trio were not the only students from Muang Phuket Municipal School to pick up a prize in the national contest, held at IMPACT Muang Thong Thani.

Three 15-year-old fellow students in Mathayom 3 – Rachi Hansamut, Siriwat Khu-a-run, and Tapi Sritirat – won third place in their age category by building a robot that mixed all the ingredients necessary to make tord mun pla (Thai fish cakes). The machine even cooked them in a deep-fat fryer.

The accolades won in the contest are the proud results of a program run by Sophon Prateep Na Talang, who heads the “Lego course” at the school.

“We started sending teams to robot-building competitions about eight years ago. Our school has done well. This is the third year we have had the opportunity to compete in robot competitions abroad,” he said.

“Last year, we went to the Philippines, but we didn’t win any awards. Two years ago, we sent a team to South Korea and won the honorable mention award,” he added.

Lego classes are compulsory for students in Prathom 3 to 5 (ages 9 to 11), but optional for older students at the school.

“It seems to be working very well as the kids quite like the classes. All students learn the basics of building Lego robots, such as how to construct the robots themselves and how to write the computer program to make the robots perform.

“The basic Lego building element helps to develop their creative thinking and the students must combine this with technology. Any students who show talent or deep interest in the program are given our full support in learning more,” Mr Sophon explained.

“This does not affect their normal classes as we set the Lego class as part of the curriculum, and I have a few teachers to help me with some parts of the course, such as developing the artistic elements of the projects and teaching the students how to present their projects to competition judges,” he said.

The teaching formula seems to be working, especially for young Pakin, Tipok and Tel, who took two months to build their cleaning robot.

“My father was the first to buy me Lego bricks and I have been building Lego toys for two years now. I like it. I can spend about four hours a day playing with Lego when I have the time,” said Pakin.

Teammate Boonyarit was the same. “I have been playing with Lego for two years and I spend two hours a day making things with Lego. We also spend time practicing with our Lego robots for going to Abu Dhabi,” he said, excited.

Young Tipok was also looking forward to going overseas. “This is the first time I have come first in a robot competition. I’m very happy to go to the competition in Abu Dhabi. Even though there will be many teams there, I think we have a 50-50 chance of winning,” he said.

The trio’s obvious enthusiasm has shows through, said their teacher, Mr Sopon.

“I only gave them some hints on how to improve their robot, but the rest they figured out for themselves,” he said.

Yet, a great challenge lies before them.

Mr Sophon said that about 50 teams will be competing in the WRO from November 18 to 20.

“All of them will also be winners of national competitions in their home countries”, he said.

The honor of winning in that competition will be glory only. The WRO offers no cash prizes. Only trophies, medals and certificates will be bestowed on the winners.

As such, the budget to send Pakin, Boonyarit and Tipok to the UAE to compete has yet to be confirmed.

“The budget will probably come from Phuket City Municipality and the children’s families,” said Mr Sophon.