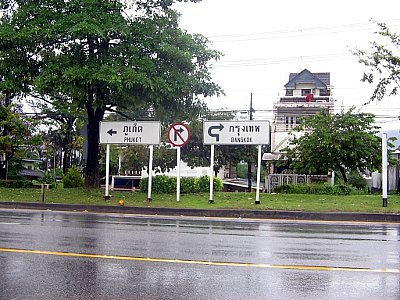 PHUKET: As Phuket Bus Terminal 2 approaches its second birthday, the Phuket Land Transport Office [PLTO] is determined to open the facility by the end of the year, despite continued resistance from Rassada Municipality where it is located (click here to see PGtv footage).

The latest discussion about the problems facing the station came at a meeting of the Phuket Provincial Bus Terminal Committee on Monday.

Despite a 21-month delay in opening the new station since work on it was completed in December 2009, most of the committee members said they are determined to get the facility open by year end (2011).

Rassada Municipality was initially assumed to be the organization that would take over day-to-day operation of the terminal, as it is the local administrative bodies who typically run provincial bus stations in Thailand.

But citing budget constraints, Rassada Municipality balked at the offer. An overture to the Phuket Provincial Administration Organization (OrBorJor) was likewise rejected, for financial reasons.

OrBorJor President Paiboon Upatising told the Phuket Gazette last year that the facility was “not ready to commence operations without considerable additional investment”.

At Monday’s meeting, Rassada Municipality Chief Clerk Sujitra Chalittanon told fellow committee members: “We don’t mind managing the Phuket Provincial Bus Terminal 2, but we just can’t afford the expense of getting the building ready to operate. We may need to request 118 million baht from the Land Transport Office in order to get the place ready to use.”

“It’s true that the building construction was completed almost two years ago, but there is still a lot of work that needs to be done and we don’t have the budget for it. We have our own problems to take care of as well,” said Mrs Sujitra.

Phuket Land Transport Office (PLTO) chief Teerayout Prasertphol said his office was prepared to seek an additional budget for Rassada Municipality to prepare the station to open, but that the 118-million-baht figure seemed absurdly high.

“I think 118 million baht sounds like an odd number. We spent that much money to buy the land and construct the building, so I think it couldn’t cost that much to decorate the place and get it ready to use,” he said.

“Since Rassada Municipality cannot handle the project due to their financial situation, the PLTO must manage it on our own,” said Mr Teerayout.

His agency could have the station up and running by year end for under two million baht, he said.

“We have requested a 1.9 million-baht budget from the Department of Land Transport in Bangkok in order to complete the whole operation and get the place ready to operate before the end of this year,” Mr Teerayout stated.

Aside from this, the PLTO expects to generate 1.4 million baht in profit from the station in its first year of operation, he added.

However, funding issues are not the only obstacles to the project.

Rassada Mayor Suratin Lianudom, whose house is located directly opposite the station, continues to insist that the station should never open.

“The traffic in that area is bad to begin with. I can’t imagine what it is going to be like when the bus terminal opens,” said Mayor Suratin.

Mayor Suratin and other local residents recently filed a complaint regarding the PLTO announcement that they would break the median strip in front of the station so that departing buses can head due north without first turning left and making U-turns at the Tantalum Junction further south.

“Local residents who live in that area, myself included, are not happy with the project. We need a public hearing before the PLTO decides to open the bus terminal since one was never held prior to the start of construction,” he told the Gazette earlier this week.

“Breaking the median strip in front of Bus Terminal 2 or creating a dedicated lane for the buses [to conduct U-turns] would not help with traffic problems that already exist.

“The bottom line is that Bus Terminal 2 should never have been built there. It should be built in the outskirts of town, far from local communities and heavy-traffic areas,” he said.