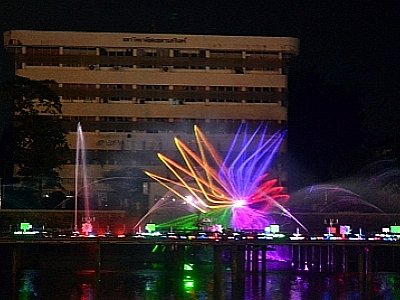 More than 100 people turned up to see the first show.

“There are very few other attractions like this just outside town. But the musical fountain will motivate people to visit and relax here,” he said.

“The musical fountain can perform more than 100 patterns with LED lighting. It also has a high lumen projector to show videos on the curtains of water,” he added.

Covering a total area of 1,000 square meters, the fountain is considered the biggest musical fountain in Thailand, Mr Paiboon said.

The 30-minute premiere on Monday began with a light-and-water show performed to a soundtrack of HM Blues (“Kham Wan“), which was written by HM The King.

The following two songs, Father of Love and Phuket World, were composed by popular artist in Thailand Todd Tongdee Lavelle.

Mr Lavelle was commissioned to write the music to be played during the light-and water shows.

Each month the performance will focus on a particular theme, with the accompanying music set to the same theme.

“I have completed composing the 12 songs to be used each month. The music and lyrics of all the songs relate to Phuket’s culture and tradition,” Mr Lavelle said.

“This month is the month of the Vegetarian Festival. We have done a lot of research. Our team interviewed Chinese descendants living in Phuket and even went to Fujian province in China in order to compose the song.