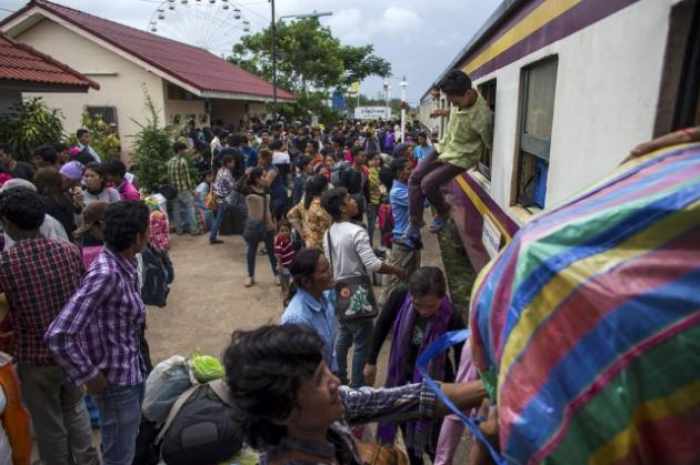 PHUKET: More than 120,000 Cambodians have fled Thailand to return home in the past week, fearing a crackdown on migrant workers after last month’s military takeover, an official said yesterday.

The mass exodus of labourers – who play a key role in Thai industries such as seafood and agriculture but often lack official work permits – comes amid a junta warning of arrest and deportation for illegal foreign workers.

“They’re returning en masse like a dam collapsing. They’ve never come en masse like this before in our history,” Kor Sam Saroeut, governor of the northwestern province of Banteay Meanchey where the main border crossing is, told AFP.

Around 122,000 Cambodians have returned from Thailand in the last week after being transported to the border by Thai military trucks or making their own way, he said late yesterday.

“They said they are scared of being arrested or shot if they run when Thai authorities check their houses,” Saroeut added. “Most of them went to work in Thailand without a work permit.”

Sirichan Ngathong, a spokeswoman for the Thai Army which seized power in a coup on May 22, had said last Wednesday the junta viewed illegal migrants as a “threat” and they faced arrest and deportation.

As a result of the rumours, “Cambodian illegal workers have reported themselves to the Thai authorities for being repatriated voluntarily to Cambodia” the statement said, adding that Thai immigration officials had provided transport for them.

More than 12,000 migrant workers crossed the border to Cambodia yesterday alone, according to Saroeut, who expects many more to make the journey over the new few days.

Thousands were sheltering from the rain at local Buddhist temples and a market as they waited for transport to their home provinces.

Cambodian authorities have arranged nearly 300 cars and military trucks to ferry workers home from the Aranyaprathet-Poipet border checkpoint but many would have to stay near the site overnight until transport became available, Saroeut said.

At the smaller border checkpoint of Boeung Trakuon, south of Poipet, around 1,000 Cambodian men and women walked across the border with heavy bags and children in tow, said a local journalist.

Chea Thea, a 33-year-old construction worker, said she returned to Cambodia two days ago in a convoy of 20 cars organised by Thai authorities – deciding to leave after seeing her compatriots were departing in large numbers. “Cambodian migrants are coming back. We feel scared,” she told AFP from her parents’ home in the northwestern province of Battambang.

“When the situation is better I may go back,” Thea said.

Soum Chankea, a coordinator for Cambodian rights group Adhoc who has met many workers at the border, said the number of returnees was growing each day.

“They keep coming, more and more. Thousands more have arrived in Poipet (border checkpoint) this morning,” he told AFP by telephone.

Six Cambodian workers and a Thai driver transporting them to the border province of Sa Kaeo died in an accident early Sunday, said Thai police official Sommart Meungmuti. The accident, which left another 12 people injured, is suspected to have been caused by a bursting tyre, he added.