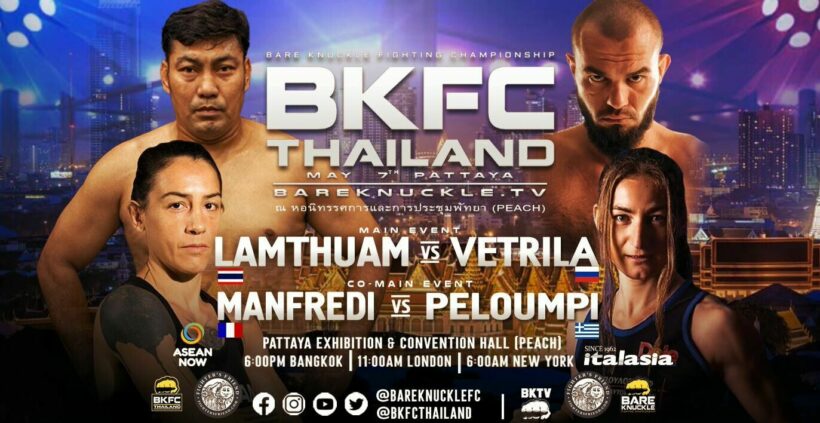 The world’s fastest-growing & most devastating combat sport, Bare Knuckle Fighting Championship (BKFC) Thailand is BACK!! Tickets are on sale NOW!!

Set to return for its second and even more epic event on Saturday, May 7th, 2022, live from the Pattaya Exhibition And Convention Hall (PEACH) at the world-renowned and multi-award-winning Royal Cliff Hotel. The event will go live at 6:00 PM ICT and is also available worldwide on the BKTV app. 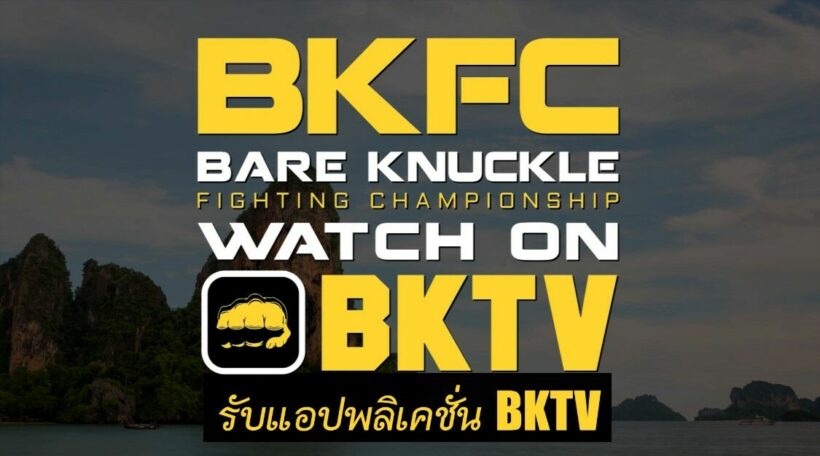 BKFC Thailand 2 ‘Iconic Impact’ is brought to you by Nick Chapman and Vathanai Vathanakul. Nick is a former MMA Champion and is CEO of BKFC Thailand. He is a prominent figure in the Thailand fight scene, often refereeing large scale fights, promoting events, managing fighters and contributing to the growth and excellence of the Thailand combat sports fight scene. His business partner, Khun Vathanai Vathanakul, is President and the son of the founder and owner of the Royal Cliff Hotel’s Group & PEACH (Pattaya Exhibition and Convention Hall), where he is looking to bring world-class hospitality and elite lifestyle side to this exciting sport.

As a team, they are looking to promote Thailand as a hub of world-class combat sports competitions in Asia. BKFC Thailand CEO Nick Chapman says, “Our aim is to inspire and enable the incredible fighters, coaches, and gyms of Thailand to achieve sustained competitive excellence and build additional lucrative enterprise around our activities. BKFC Thailand endeavors to bring many opportunities, fun and excitement for everyone here in Thailand.”

There are also three rematches set between bitter rivals. At heavyweight, Iran’s Akbar Karimi will try to get revenge on former Muay Thai foe Steve’ Panda’ Banks of the USA. In the lightweight division, a pair of 25-year-olds from Thailand’s underground fighting circuit are set to go to battle in a grudge match that has been brewing and growing attention on social media for a few years when Naeem Binhar goes up against Sornchai “Maseng” Kantiphong. Finally, the originally scheduled main event for BKFC Thailand 1: ‘The Game Changer’ between Tee Jay Chang and Fabiano Hawthorne has been rebooked. As their bad blood continues to boil over, the rematch of their prior bare-knuckle boxing bout, which Hawthorne won by controversial fourth-round stoppage, will occur. 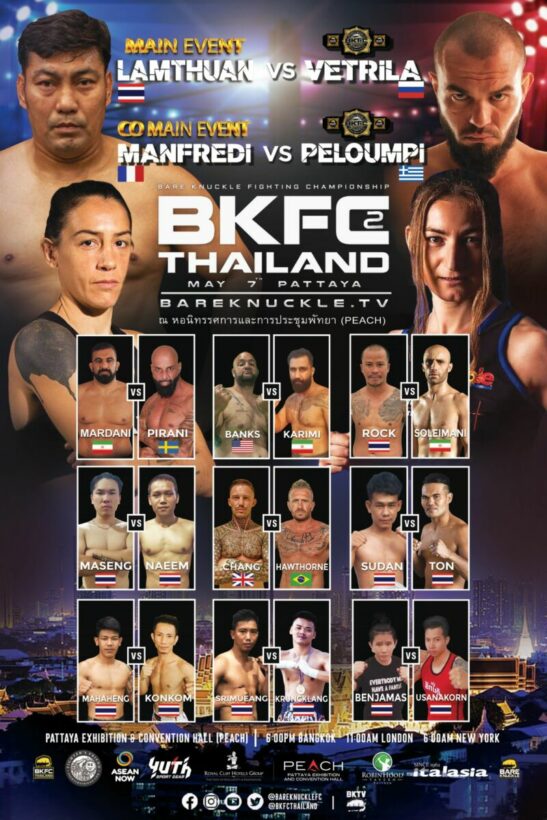 Overall, fighters from ten countries will be represented, and all have extensive striking backgrounds, making for an exciting night of fights. The entire fight card is listed below: 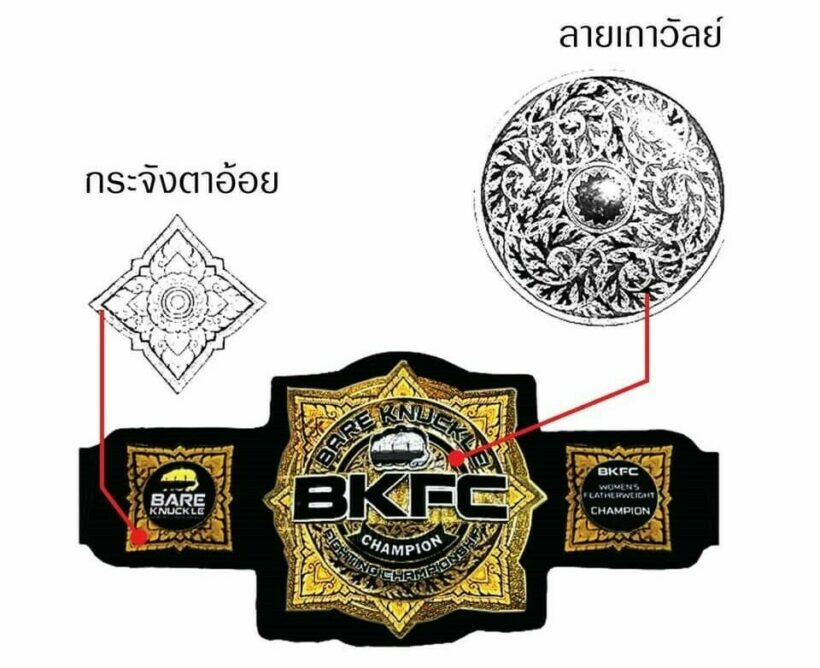 BKFC is a globally recognized organization, thanks to the efforts of BKFC President and CEO Dave Feldman. BKFC has reached new heights in the USA, Europe and Russia through staging exhilarating, fast-paced bare-knuckle fighting events.

While these remain foreign concepts in western boxing and most other martial arts, these techniques are legal under the BKFC rules, giving Muay Thai fighters several distinct advantages in BKFC’s unique arena:- The Squared Circle. Unlike MMA’s cage or a conventional four-sided boxing ring, BKF (Bare Knuckle Fighting) occurs within a unique circular roped stage. Fighters can’t get stuck in a corner, making fights dynamic and constantly revolving—a really dynamic and exciting treat for the audience to watch.

Muay Thai fighters have been fighting bare-knuckle or roped hands for hundreds of years. Thai people are some of the toughest and fiercest fighters on the planet. We believe we will be seeing world champions in BKFC coming out of Thailand very soon

BKFC Thailand will present a series of bare-knuckle fighting events to be held in Thailand. Our events will encompass a traditional bare-knuckle boxing style while utilizing a specifically created rule set that emphasizes the half Thai clinch with punching strikes allowed inside the clinch.

This is new, this is exciting, and it is as real as it gets; bare-knuckle means bare-knuckle in this sport. Fighters do not tape or wrap anything over the knuckles, it’s gloves off, toe on the line and knuckle up!!

Italasia who supply imported beverages to the Hotel and Restaurant industry with an exclusive selection of Wines imported from around the world, Premium Spirits, Mixers, Mineral water and Coffee.

Yuth Sports Gear for providing all our fighter and official’s clothing. Yuth Sports Gear is focused on bringing affordable sports clothing and equipment to all types of sports, including BKFC Thailand.

Come be a part of something truly special and exciting and check out BKFC Thailand 2 ‘Iconic Impact’. You can buy tickets At this link. Call 080 317 4131 or subscribe to the BKTV App at this link: https://referral.bareknuckle.tv/BKFCThailand

It’s history in the making and not to be missed!

Saltire
What kind of people enjoy this?

Poolie
2 hours ago, Saltire said: What kind of people enjoy this? Thugs and wannabe thugs. 😀