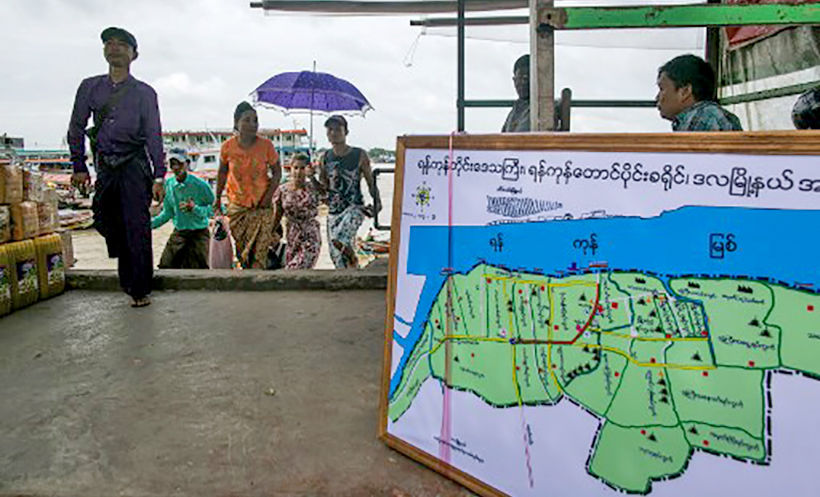 “An enormous industrial zone spanning the area south and west of the river, largely funded by money from Korea and China, is under consideration.”

On her scruffy, downtrodden bank of the river, teashop-owner Khin works just a few hundred metres over the muddy water from Myanmar’s capital Yangon, and dreams of the riches promised by a new bridge linking her to the commercial heart.

Spanning the Yangon River, the project is due to be completed in 2022, easing the commute for thousands crossing the waters by boat from rural, underdeveloped Dala.

“The quicker, the better,” 58 year old Khin Than Myint tells AFP of the construction of the $168 million bridge, from her shop in Dala township.

“Currently the sick sometimes cannot even reach hospital before it is too late. But with the bridge people will be able just to walk to Yangon.”

Residents of Dala have witnessed the changes over the river as foreign investors poured billions of dollars into Yangon.

Five-star hotels and gleaming shopping malls, brimming with luxury brands, now punctuate the skyline, competing for space with Shwedagon Pagoda’s golden spire. In Dala, goats wander between rice paddies and residents negotiate potholed roads on fume-belching motorbikes and tuk-tuks – forbidden in downtown Yangon. A regular ferry service and a fleet of small wooden boats have long been the only link between the two worlds.

After nearly half a century of military rule, Myanmar started opening up in 2011.

Over the next seven years, Yangon attracted almost half of the country’s foreign investment, some $25.8 billion, according to PricewaterhouseCoopers.

While living standards are improving for many, a third of people languish in poverty, infrastructure remains patchy and much of the country is affected by conflict.

Still Yangon’s boom has brought jobs for many of Dala’s residents too – including the boatmen manoeuvring vessels through the river’s busy freight traffic. Aung Myo Win has spent 14 years shuttling people across the river and is torn about the new bridge. The 45 year old knows it will likely leave him – and dozens of others – jobless, but he also sees the bigger picture.

“The bridge is for the people. We must sacrifice ourselves for the sake of development.”

Yangon’s southern districts were historically swampland, the reason the city grew northwards away from the river, says David Ney, urban specialist at The Asia Foundation.

“Dala was kind of put on the backburner,” he says.

But this now looks set to change.

An enormous industrial zone spanning the area south and west of the river, largely funded by money from Korea and China, is under consideration. But some are wary about the realities of rapid development. 68 year old Yangon taxi driver Chit Nyunt says on the north bank the rich have got richer, leaving the poor behind.

“Rising costs of rent and food mean families can barely cover their costs,” he says.

In Dala, however, Khin is pinning her hopes on the bridge.

“I want to build a nice house and I’ll open a bigger restaurant and some shops — just like in Yangon.”