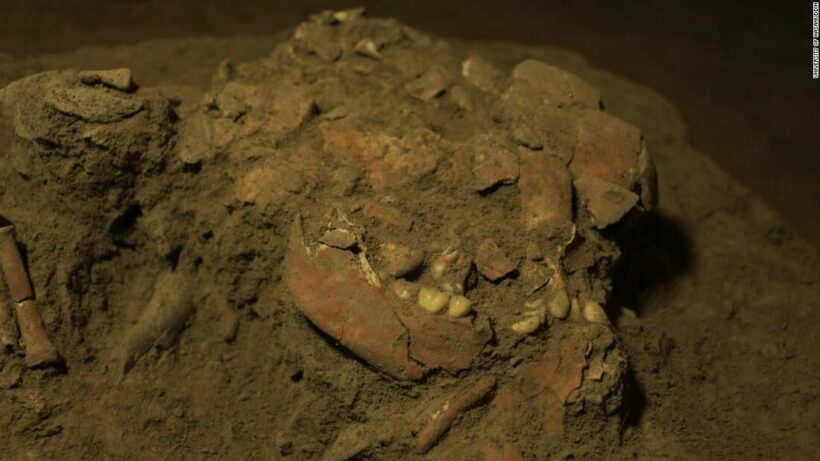 The remains of a 7,200 year old skeleton from a female hunter-gatherer have been found by archaeologists in Indonesia. Local media says the remains represent a “distinct human lineage” not previously seen anywhere else in the world, citing research that came out last week. The mostly intact fossil is believed to be from a teenage girl, between the ages of 17 and 18. The skeleton was found buried in the foetal position inside Leang Panninge, a cave in South Sulawesi.

The skeleton was discovered among artefacts from the Toalean people, an ancient culture of hunter-gathers in the area. The newly discovered skeleton is the first known skeleton of a Toalean. The study comes from a joint collaboration between Indonesian and international researchers, with excavation having begun in 2015.

“This is the first time anyone has reported the discovery of ancient human DNA from the vast island region between mainland Asia and Australia,” says Adam Brumm, an archaeologist at the Australian Research Centre for Human Evolution at Griffith University in Brisbane, who participated in the research.

Adam’s comments refer to a region that extends from Kalimantan and Lombok to the western part of Papua. The researchers had found the excavation especially difficult as DNA degrades easily in a tropical climate. Adam says it’s very rare to discover ancient human DNA in such a climate, making the find a lucky discovery.

DNA analysis determined that the woman’s skeleton belonged to a population group related to modern-day Papuans and Indigenous Australians. The discovery casts into double prior theories about the arrival times of various groups of humans in the area.