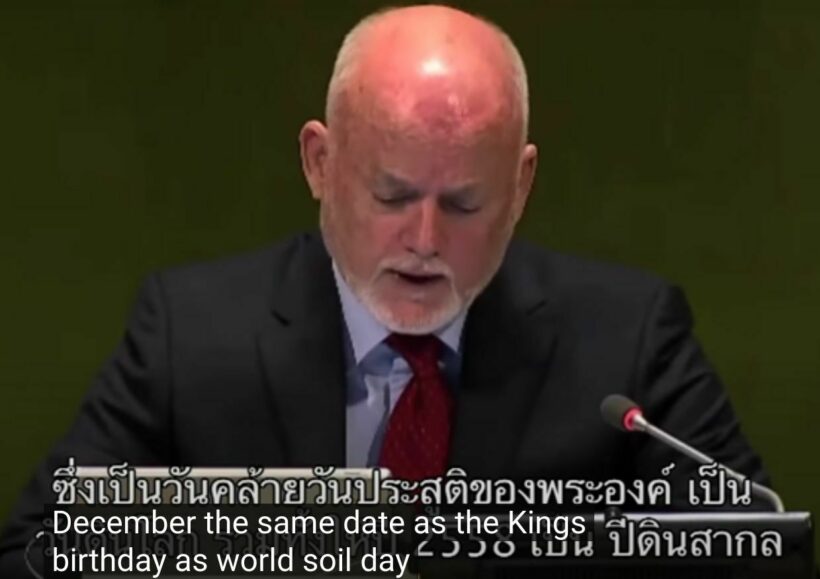 PHOTO: Peter Thomson at the UN General Assembly dedicates December 5 as World Soil Day in honour of the former King (via YouTube screencap)

Despite a rumour and video going viral on Thai Facebook and Twitter, the UN has NOT declared December 5 “international king’s day” in honour of Thailand’s King Bhumibol Adulyadej, Rama 9, the former King who died in 2016 after over 70 years reigning over Thailand.

The information came to light following a ‘fact checking’ article published by AFP.

The post began making the rounds on social media on September 22 but has been dispelled as a false claim.

According to AFP, the video footage was actually of the former president of the UN General Assembly, Peter Thomson, in a speech given on October 28, 2016, paying tribute to Thailand’s King Bhumibol’s recent passing just 2 weeks before.

In the video, he mentions that in 2013 the UN General Assembly designated the King’s birthday, December 5, as World Soil Day due to the former monarch’s dedication to environmental causes and the use of sustainable development with soil to lift people out of poverty.

“Under the king’s leadership, Thailand raised global awareness of the importance of soil as a  resource of poverty reduction, climate change adaptation, sustainable development and security.”

The viral posts and video seem to have confused the dedication of World Soil Day in honour of the former Thai King with the idea of an international king’s day on his birthday, whether the mix-up was intentional or accidental. The spokesperson for the UN Resident Coordinator Office in Thailand confirmed to AFP that no such day has been designated by the UN.

ThailandBob
Whew!  I was losing sleep over this.  Was praying it was fake news.