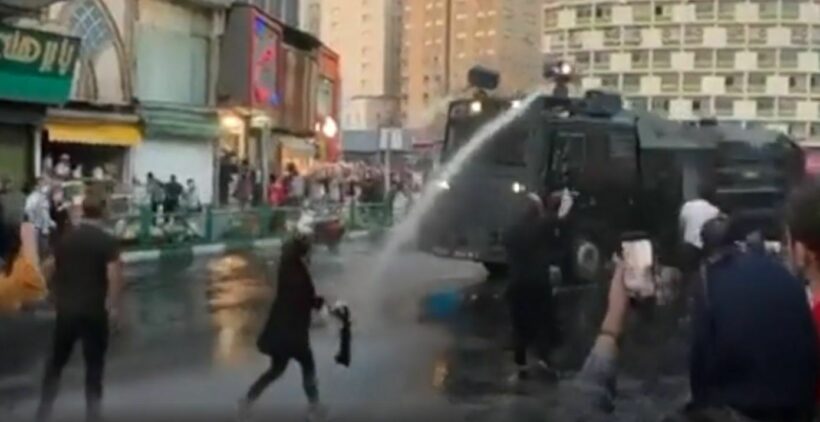 Iran has been reeling ever since a young woman died after being arrested by the country’s “morality police” on September 13. The woman, 22 year old Mahsa Amini, was arrested while on holiday with her family, who had travelled to the capital of Tehran from their home in the Kurdistan region. Morality police arrested her for supposedly not wearing her hijab properly.

According to the United Nations OHCHR, there are reports that Mahsa was beaten on the head with a baton, and her head was banged against a vehicle. Iranian authorities have stated that she died of natural causes.

Now, enraged protestors have taken to Iran’s streets to demand an end to Iran’s compulsory hijab laws. A video on Twitter shows protestors tearing down a billboard sign with Supreme Leader Khamenei’s face.

#Iran’s Supreme Leader didn’t say anything about #Mahsa_Amini’s death by his morality police or the nationwide protests against his leadership in his speech on Wednesday. This is how protesters are feeling about him… pic.twitter.com/JSJLoCGqKn

Other videos show women chanting, “No to the headscarf, no to the turban, yes to freedom and equality!”

As protests continue across Iran and the number of deaths rising, the #Iranian authorities have shut down Instagram. The most popular social media platform there. This video is from the southern island of Qeshm. #MahsaAmini pic.twitter.com/2wpsCd1MNv

Nine protestors have been reportedly killed. One of the deaths was a 16 year old boy who was shot dead.

Iran severely restricts women’s rights in many ways and has done so ever since the Islamic Revolution of 1979. The country still maintains a dress code requiring women to cover their arms and legs, and wear headscarves.

It’s illegal in Iran for women to voluntarily sterilise themselves since the government wants to promote “traditional” families. Women cannot leave the country without their husbands’ permission. Several activists who have spoken out for women’s rights in Iran have been imprisoned, tortured, and killed by the government.

Mahsa’s brutal death is the latest of many deaths of women under an authoritarian, theocratic government.

Smiler
Poor woman was beaten and died as a result of the morality police not agreeing how she was wearing her clothes? What century do these people live in? They are stuck in the Middle Ages with beliefs that are based…

Rookiescot
Before the Islamic Revolution (its the religion of peace remember) Iran was a progressive country where men and women were largely equal. At the time the middle east was pretty peaceful. However once the religious fundamentalists took over in Iran…

TheDirtyDurian
Such a shame the mad mullahs in Iran still hold sway. Met many Iranians over the years, well educated and articulate people. Perhaps in time they can follow Saudi Arabia's lead and remove any morality, religious police from public life.