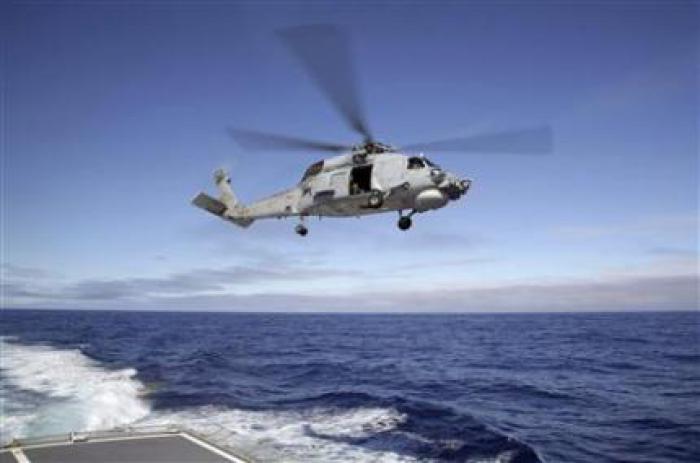 PHUKET: Chinese and Australian ships hunting for a missing Malaysia Airlines jetliner have picked up separate acoustic signals in different parts of a vast Indian Ocean search area and are trying to verify if one could be from the plane’s black box recorders.

Australian search authorities said on Sunday a Chinese patrol vessel, the Haixun 01, had picked up a fleeting “ping” signal twice in recent days in waters west of Perth, near where investigators believe Malaysia Airlines Flight MH370 went down on March 8.

More planes and ships were being sent to assist in that area. Meanwhile, Australia’s HMAS Ocean Shield had reported a separate “acoustic event” some 300 nautical miles away.

The Ocean Shield is carrying sophisticated U.S. Navy equipment designed to pick up signals sent from the black boxes, which may hold the key to why the aircraft ended up thousands of kilometres off course.

“We are treating each of them seriously. We need to ensure before we leave any of those areas that this does not have any connection with MH370,” Retired Air Chief Marshal Angus Houston, head of the Australian agency coordinating the operation, told a media conference in Perth.

A black box detector deployed by the Haixun 01 picked up the signal with a frequency of 37.5kHz per second – the same as emitted by flight recorders – at about 25 degrees south and 101 degrees east, Xinhua reported on Saturday.

Australian search authorities said such a signal would be consistent with a black box, but both they and Xinhua stressed there was no conclusive evidence linking it to the Boeing 777.

“The 37.5kHz is the specific frequency that these locator pingers operate on,” said Anish Patel, president of Sarasota, Florida-based Dukane Seacom, which made the black box locator.

“It’s a very unique frequency, typically not found in background ocean noise,” such as whales or other marine mammals, he told Reuters.

A U.S. government source close to the MH370 investigation said on Sunday that the “pings” have not yet been validated. The source also said that no additional, trustworthy information had turned up to explain why the plane disappeared.

Southern area back in focus

Houston said analysis of earlier satellite data had again led investigators to refine the search area towards the southern part of the corridor.

“The area of the highest probability is, what we think, the southern part where Haixun 01 is operating. That is why we are really interested in the two acoustic encounters that Haixun 01 has had.”

Australian Prime Minister Tony Abbott said he was “hopeful but by no means certain” that the reported pulse signals were related to MH370.

“This is the most difficult search in human history. We are searching for an aircraft which is at the bottom of a very deep ocean and it is a very, very wide search area,” Abbott told reporters in Tokyo, where he is on a visit.

Up to a dozen planes and 13 ships will be scouring three separate areas about 2,000 km (1,243 miles) northwest of Perth, Australia’s Joint Agency Coordination Centre said on Sunday.

Authorities have not ruled out mechanical problems as a cause of the plane’s disappearance, but say the evidence, including loss of communications, suggests it was deliberately diverted.

Malaysia said on Saturday it had launched a formal investigation into the plane’s disappearance that would include experts from Australia, the United States, China, Britain and France.

Normally, a formal air safety investigation is not launched until wreckage is found. But there have been concerns that Malaysia’s informal investigations to date have lacked the legal standing of an official inquiry convened under U.N. rules.

Under International Civil Aviation Organisation rules, the country where the aircraft is registered leads the investigation when the incident takes place in international waters.

Malaysian Defence Minister Hishammuddin Hussein said the investigation would comprise three groups: one would examine maintenance records, structures and systems; an “operations” group would study flight recorders, operations and meteorology; and a “medical and human factors” group would look into psychology, pathology and survival.