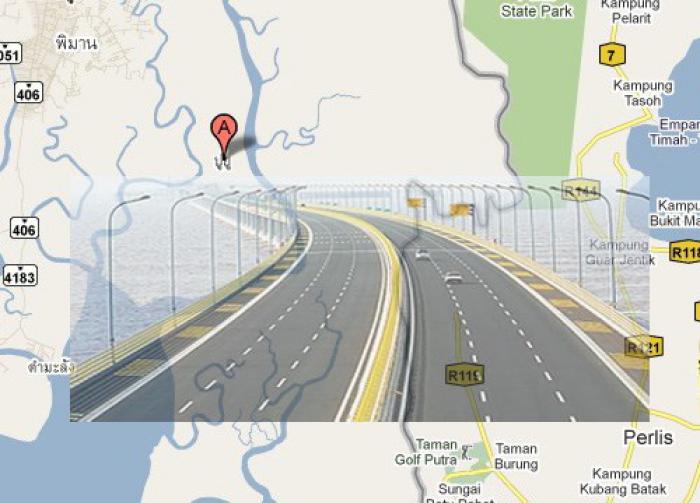 PHUKET: A stunned Governor of Satun Province has denounced reports that plans were afoot to build a four-lane motorway over the Andaman Sea to join Satun Town in Southern Thailand with Perlis in northwestern Malaysia.

“I don’t know why this is in the news again. The project was first raised in 1997, but failed to pass its Environmental Impact Assessment [EIA] in 2001,” Governor Nuachai told the Phuket Gazette.

“Although the road would have been elevated for most of the way, it would still have had to pass through protected mangroves.”

Kanchitpon Netsuwan, the director of the Satun Highways Department, told the Gazette that although the entire project – priced in 2001 – would have cost 15 billion baht, Thailand was to pay only 3.9bn baht.

“The project was deemed too expensive and harmful to the natural ecosystem of areas where the elevated road was to be built,” he said.

Despite the elevated motorway project being sunk more than a decade ago, Satun and Perlis officials have long continued talks on improving road links between the two Andaman coast regions, Governor Nuachai said.

“We continue to engage in discussions with Dato Seri Dr Md Isa Sabu in Perlis about improving transportation links between Perlis and Satun,” he said. “Any improvements would be beneficial to both our local economies.”

Phuket Tourist Association Vice President Sarayuth Mallam said he was not aware of the mega-project, but added that he would have supported it.

“It would likely be of little direct benefit to Phuket, as Satun is more than 400km away. However, any improvement in transportation links to the Andaman region would only help boost tourism along the Andaman coast,” he said.

“A project such as this would help drive tourism in other less-developed areas along the Andaman seaboard.”

Phuket to be “unaffected’ during 28-day power disruptions

Phuket Lake Filling: A sneak behind the watershed