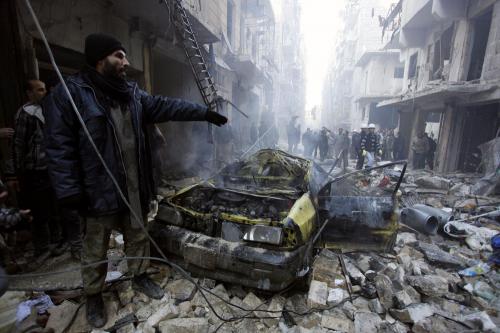 
Riot in China’s Xinjiang kills 16, “terror gang” blamed
Reuters / Phuket Gazette
PHUKET: Chinese police shot and killed 14 people during a riot near the old Silk Road city of Kashgar in which two policemen were also killed, the local government said on Monday, the latest unrest in a region that has a substantial Muslim population.

China has previously called some of the violence in the far western region of Xinjiang the work of Islamist militants plotting holy war.

Describing the incident which happened late on Sunday, Hua Chunying, a spokeswoman for the Ministry of Foreign Affairs, stopped short of directly blaming Islamist militants but said a “violent terror gang” attacked police with explosives.

“It once again showed the true face of violent terror. It should be condemned by all people who love peace and stability,” she told a daily news briefing. “This conspiracy does not enjoy popular support and is doomed to failure.”

The regional government said police were attacked by a mob throwing explosive devices and wielding knives when they went to arrest “criminal suspects” in a village near Kashgar.

“Police responded decisively,” the government said in a brief statement, adding that two people had been detained and that an investigation had been launched.

The official Xinhua news agency said in an English-language report that “terrorists” were responsible. It did not elaborate.

A police officer reached by Reuters in the county where the incident occurred, called Shufu county in Chinese, said it was “not convenient” to provide any additional information.

In a similar outburst of violence, at least nine civilians and two policemen were killed when a group of people armed with axes and knives attacked a police station also near Kashgar last month, state media has said.

Rights groups and exiles say police often use often heavy-handed tactics against the Muslim Uighur community, which calls Xinjiang home. Violence has broken out previously when groups of Uighurs protest at police stations, they say.

China has stepped up security in Xinjiang after a vehicle ploughed into tourists on the edge of Beijing’s Tiananmen Square in October, killing the three people in the car and two bystanders.

China said the attack was carried out by Islamist militants, and has reacted angrily to suggestions that it was because of frustration and anger over government repression of Muslims in Xinjiang.

Many of Xinjiang’s Turkic-speaking, Muslim people chafe at restrictions on their culture, language and religion, although the government insists it grants them broad freedoms.

Xinjiang has been the scene of numerous incidents of unrest in recent years, which the government often blames on the separatist East Turkestan Islamic Movement, even though many experts and rights groups cast doubt on its existence as a cohesive group.

Many rights groups say China has long overplayed the threat posed to justify its tough controls in energy-rich Xinjiang, which lies strategically on the borders of Central Asia, India and Pakistan.


UN seeks largest ever aid project to avoid Syrian catastrophe
Reuters / Phuket Gazette
PHUKET: The United Nations appealed for $6.5 billion for Syria and its neighbours on Monday to help 16 million people next year, many of them hungry or homeless victims of a 33-month-old conflict that has no end in sight.

The Syrian appeal accounted for half of an overall funding plan of $12.9 billion to help 52 million people in 17 countries, announced on Monday by U.N. emergency relief coordinator Valerie Amos at a meeting of donor countries in Geneva.

“This is the largest amount we have ever had to request at the start of the year,” she told a news conference, referring to the worldwide appeal. She said the money requested for Syria was the largest U.N. appeal ever for a single crisis.

“The increasing number of internally displaced people and refugees is generating greater needs across all sectors and straining the capacities of neighbouring countries, with profound regional consequences,” the appeal said of Syria.

The United Nations sent its first delivery of humanitarian aid by air to Syria from Iraq on Sunday and said it plans to deliver more food and winter supplies to the mainly Kurdish northeast in the next 12 days.

For five neighbouring countries – Egypt, Iraq, Jordan, Lebanon and Turkey – the world body is seeking $4.2 billion to assist up to 4.1 million Syrian refugees and host communities who will be given food aid including cash or vouchers.

The U.N. World Food Programme aims to feed 4.25 million people in Syria, where it reached only 3.4 million in November.

“This is the worst humanitarian crisis that we have seen in decades, with every day more vulnerable Syrians pushed into hunger,” Muhannad Hadi, WFP’s Syria Emergency Coordinator, said.

“I cannot imagine a more ‘indiscriminate’ and ‘arbitrary invasion’ than this systematic and high-tech collection and retention of personal data on virtually every single citizen,” U.S. District Judge Richard Leon, appointed by Republican President George W. Bush in 2002, wrote in a 68-page ruling.

The U.S. Department of Justice said it was reviewing the ruling in a case brought by Larry Klayman, a conservative lawyer, and Charles Strange, described in court documents as the father of a cryptologist technician for the NSA who was killed in Afghanistan in 2011. The judge ordered the government to stop collecting data about the two plaintiffs, who were Verizon Communications Inc customers. Verizon declined comment.

“We believe the program is constitutional as previous judges have found,” Department of Justice spokesman Andrew Ames said in a statement.

Leon suspended enforcement of his injunction against the program “in light of the significant national security interests at stake in this case and the novelty of the constitutional issues” pending an expected appeal by the government. A U.S. official said an appeal was likely.

Leon expressed skepticism of the program’s value, writing that the government could not cite a single instance in which the bulk data actually stopped an imminent attack.

“I have serious doubts about the efficacy of the metadata collection program as a means of conducting time-sensitive investigations in cases involving imminent threats of terrorism,” he wrote.