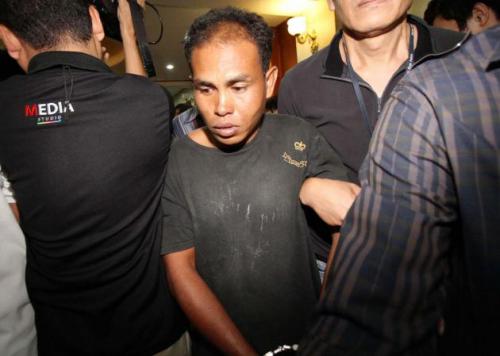 
Lessons learnt in sad fate of 6-year-old girl
The Nation / Phuket Gazette
PHUKET: A former convict has confessed to raping and strangling a six-year-old girl in Bangkok earlier this month after she strayed briefly from her father’s attention. Police say she was just one of his many victims.

The self-confessed serial abuser, now identified only as Nui, is in police detention.

On Sunday, police arrested him in Nong Khai, where a popular Mor Lam band had staged a performance. The alleged suspect was tracked down after media, including social media, showed pictures of the suspect walking alongside his latest victim. The pictures came from security cameras. Some members of the audience noticed the suspect’s T-shirt and alerted police that it was the type used by crewmen of the Mor Lam band.

The girl went missing after she went to a concert with her father on December 6. The father said his daughter fell asleep during the performance. He decided to take her to his friend’s pickup truck hoping she could get a proper sleep. He went back to see the concert. On his return to the vehicle, he found his daughter was gone.

“I was drunk and had a sexual urge,” Nui said.

According to police, Nui is a repeat offender and has confessed to raping and killing a large number of girls.

“He said he had raped about 10 girls and killed some of his victims,” a senior commander, Pol Maj-General Suebsak Phansura said.

In 2008, Nui was sentenced to a jail term for taking a minor away from guardians. He was released on August 23 last year.

Nui’s confession has dashed their hopes of finding her alive. In a desolate area on Soi La Salle, a human skull was found on Sunday and DNA tests are ongoing to determine if the remains are those of the missing girl.


Democrats decide on election boycott today
The Nation / Phuket Gazette
PHUKET: The opposition Democrat Party is facing a dilemma in having to decide today whether to field candidates in the general election scheduled for February 2 amid calls from within the party to boycott the poll.

The most talked-about issue amid the current political impasse has been whether to bring about reforms first or hold the elections first. The anti-government protesters want national reforms before the election, while the Pheu Thai-led caretaker government wants to hold the election first and then proceed with the reforms.

A party resolution, in general assembly, on the issue, which might be reached tomorrow at the latest, will be decided by a new 35-member executive board, which will be elected this morning. It’s likely that Abhisit Vejjajiva would retain his post for another term while former MP from Phitsanulok, Juti Krairiksh, is tipped to become the party’s new secretary-general, a party source said.

The pro-election faction argues that running in the election after the House dissolution is a democratic way. But they agreed that a national reform is needed after the poll. If the party decided to boycott the election, there would be no opposition party in the House until its term ended, the camp argued.

However, the other camp supported protest leader and former Democrat MP Suthep Thaugsuban’s demand for national reforms before an election. They argue that without reforms, all problems will not be solved.

However, a Democrat boycott of the election will not be an obstacle in holding the election. The Democrats and other opposition parties had boycotted the election in April 2006, called by then prime minister Thaksin Shinawatra under Thai Rak Thai.

The Thai Rak Thai Party won a landslide victory, but several candidates of the party failed to meet the minimum requirement of getting at least 20 per cent of eligible votes in a constituency if the constituency has only one candidate.

The Constitutional Court found it guilty of paying smaller parties to contest the election to fulfil the 20-per-cent rule, which led to the dissolution of the party.

Pheu Thai this time has already prepared to face the legal obstacles and won’t allow a repeat of the situation.

“We are not worried. If the Democrats boycott the poll, we could have 60 small parties field candidates for 375 constituency-based MPs to avoid the 20-per-cent minimum votes rule,” former deputy House speaker Apiwan Wiriyachai said.

He said Pheu Thai’s strategy committee would call a meeting after the Democrat Party decides on whether to take part in the election or not.

Apiwan said the People’s Democratic Reform Committee (PDRC) would be acting like gangsters if its members blocked voting at some polling stations on election day.

The PDRC leaders on Sunday announced a blockade of all polling stations and threatened to create political disturbances in some areas to obstruct the holding of the election.

He said he will recommend at the party’s meeting that it should mention its constitutional amendment plan on the election manifesto.

“We could have a referendum on whether to amend the current charter or not at the same time as the general election,” he said.

A Pheu Thai source said the party would field Yingluck and her brother-in-law and former prime minister Somchai Wongsawat as No 1 and No 2 party-list candidates respectively.

“She is still popular. But if she feels she has had enough of politics, then Somchai can replace her,” a party source said.

He foresees no hurdles in hosting the elections, despite calls for a boycott from some political parties. Some anti-government protesters are planning to disrupt the process, when the EC opens registration for party-list candidates.

‘The Power of Resilience’: Anna wins the Miss Universe Thailand crown by Mouawad