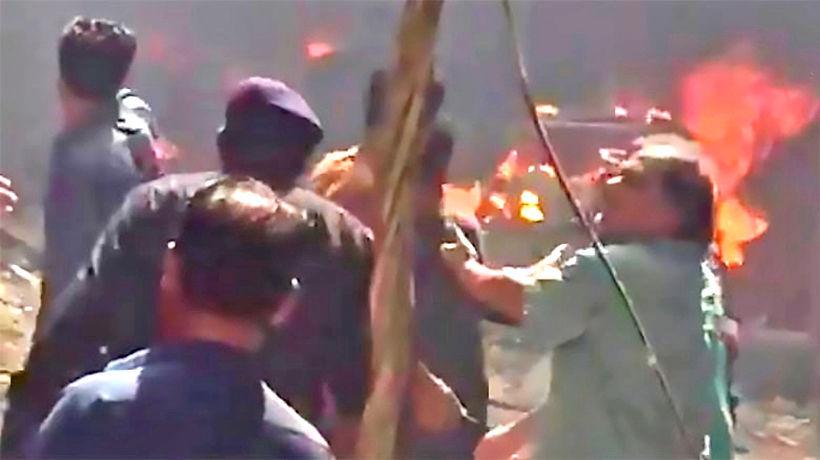 A Pakistan International Airlines plane carrying 99 people crashed into a crowded Karachi neighbourhood yesterday afternoon after trying twice to land at the airport, according to an eyewitness. Provincial health authorities have confirmed at least 80 dead but it’s not clear whether they included casualties on the ground.

2 passengers survived, including Zafar Masood, president of the Bank of Punjab, according to a government spokesman. The bank says he suffered fractures but is “conscious and responding well.”

Engineer Muhammad Zubair, the other survivor, told reporters the pilot came in for one landing, touched down briefly, but took off again. After about 10 more minutes in the air, he announced he was going to make a second attempt, but crashed as he approached the runway

“I opened my seat belt and saw some light. I went towards the light. I had to jump down about 10 feet to get to safety.”

The crash happened on the eve of the Muslim Eid Mubarak festival, marking the end of the holy month of Ramadan, when Pakistanis travel to visit relatives. Smoke gushed from the site where flight PK 8303 crashed at about 2:45pm, its twisted fuselage lying in the rubble of multi-storey buildings as ambulances rushed through crowds.

Authorities say the Airbus A320 was flying from the eastern city of Lahore to Karachi in the south with 91 passengers and eight crew, just as Pakistan was resuming domestic flights in the wake of the coronavirus pandemic.

Seconds before the crash, the pilot told air traffic controllers he had lost power from both engines, according to a recording posted on liveatc.net, a respected aviation monitoring website.