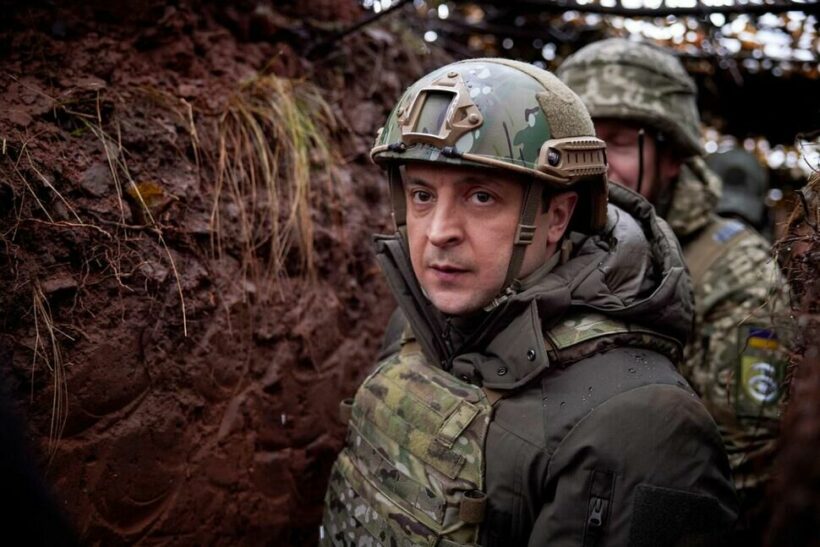 On the fifth day of the Russian invasion of Ukraine, satellite images show a mammoth convoy of Russian armoured vehicles with militia about 64 kilometres long is slowly slithering down from the north toward the capital of Kyiv.

The serpentine convoy is now less than 30 kilometres away. Air raid sirens have been sounded again, with Russian strikes on the outskirts of the city, the BBC reports.

In Kharkiv, Ukraine’s second largest city, a Russian missile strike has hit Freedom Square in the city centre, causing a massive explosion. It targeted the regional government’s headquarters near the Ukraine-Russia border.

Ukrainian President Zelensky has condemned the bombing of Kharkiv as yet another war crime, saying Russian military forces are intentionally targeting civilians. (More on that below.)

Earlier, negotiators from Kyiv and Moscow held talks in Belarus in a bid to end the conflict, but failed to reach an agreement.

Despite the first round of peace talks ending without a ceasefire, both sides have agreed to continue talking and will meet again “in the next few days” after reporting back to their respective capitals.

Ahead of the meeting, Ukraine President Zelensky called on Russian troops to put down their weapons. He also called for immediate EU membership. Neither call has been answered, as fighting intensifies around the besieged capital.

Yet there remains a sliver of hope for the outnumbered Ukraine, as its armed forces continue to bravely hold off the Goliath Russia, which has so far failed to capture even one major Ukrainian city since its invasion began last Thursday.

Doubtless, Putin is beginning to feel the pain of intense international sanctions, which have severed his country from the the SWIFT international transaction system, sending the value of the rouble into a nosedive while doubling inflation — and cut off Russia from the Western world, banning flights to Europe, Canada and the US.

The International Criminal Court’s prosecutor says he wants to investigate Russia for possible war crimes, after Ukraine and its allies called on the United Nations to investigate.

On Monday, The United Nations Human Rights Council voted to approve Ukraine’s request for an urgent debate on Thursday to debate Russia’s invasion, and to review a Ukrainian draft resolution.

In a statement, prosecutor Karim Khan said the investigation will review alleged crimes committed before the Russian current invasion, beginning with the annexation of Crimea in 2014.

“Given the expansion of the conflict in recent days, it is my intention that this investigation will also encompass any new alleged crimes falling within the jurisdiction of my office that are committed by any party to the conflict on any part of the territory of Ukraine.”

Zelensky has accused Russia of war crimes for bombing the city of Kharkiv. Ukraine’s interior ministry says dozens of civilians were killed in Russian missile strikes on Ukraine’s second largest city on Monday.

Switzerland’s sanctions will align with those that the European Union has already adopted, CNN reported.

“The Swiss Federal Council has decided today to fully adopt EU sanctions. It is an unparalleled action of Switzerland, who has always stayed neutral before.”

Elsewhere in Europe, Uefa and Fifa have suspended Russian football clubs and national teams from all competitions, after the International Olympic Committee called for a ban of all Russian representation, including athletes and officials, from international athletics competitions.

Fifa has excluded Russia from a World Cup qualifying playoff match on March 24 and Poland has refused to play the scheduled game against Russia, CBC reported.

The United Nations says already more than half a million refugees have fled Ukraine for neighbouring countries, including Poland, Hungary and Romania.

Thailand is continuing its evacuation of Thai citizens from Ukraine. The first repatriation flights from Warsaw and Bucharest are set to arrive in Thailand on Wednesday, carrying more than 140 Thai nationals combined. Dozens of others remain trapped in Ukrainian cities, including the besieged capital of Kyiv, but are reportedly safe.

Meanwhile, Australia Prime Minister Scott Morrison has pledged to contribute US$50 million in military support to Ukraine in the form of both lethal and non-lethal aid. He said Australia will also contribute about US$25 million in humanitarian aid.

EdwardV
When the head of your delegation is the former cultural minister, your sincerity might come into question. Russia demanded full demilitarization of Ukraine and acknowledgment of the annexation of Crimea. Ukraine demanded a full ceasefire and withdrawal of all…
1l1
5 hours ago, EdwardV said: former cultural minister with a faked DSc degree btw

ThaiEyes
Just a sideshow for both parties

Poolie
Surely the headline should read 'convoy' not 'envoy?'

Indonesia evacuates citizens from Ukraine to safety in Poland, Romania