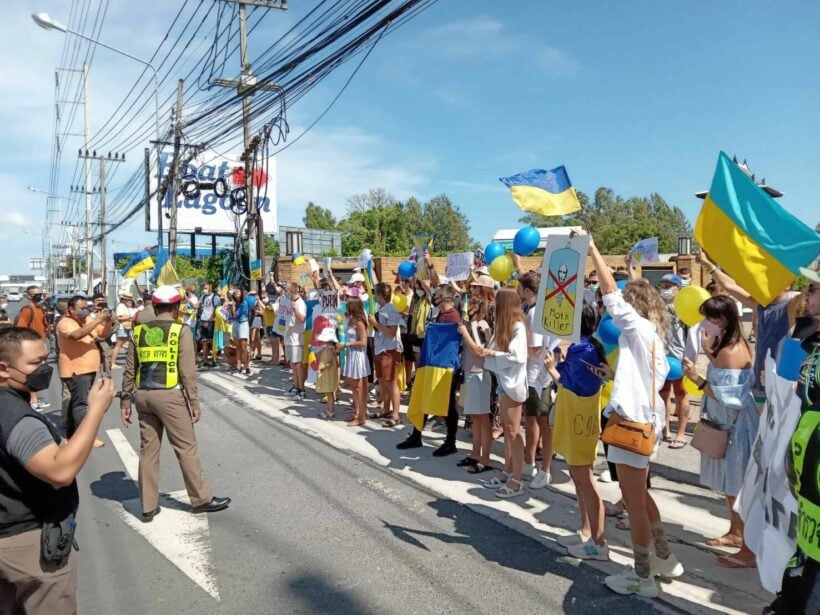 Ukrainians and Russians in Thailand have been gathering in various locations in Phuket to call for peace and urge to stop the violence. Crowds waved flags and balloons in Ukraine’s national colours yellow and blue as they called for an end to the conflict.

This morning, over 80 Ukrainian and Russian tourists and expats were on the roadside by the Royal Phuket Marina with signs and national flags. A smaller group of tourists stood in front of Phuket’s Russian Embassy, and they were later joined the big group at the Royal Phuket Marina. They held the signs with messages related to the conflict and they called for peacefulness. They rally ended at around 10:30am this morning.

Over the weekend, some also gathered at Patong Beach, holding signs and the Ukraine national flag. The group’s representatives, Ahacctacir, shared with Thai media that they contacted each other on Facebook to arrange the rally. The authorities asked the group to only gather for 20 minutes.

Faz
A number of off topic unrelated post and replies jesting about a Ukrainian bride have been removed, along with other off topic bickering post. Refer to forum rules: All text and posted content must align to the topic and/or the first…