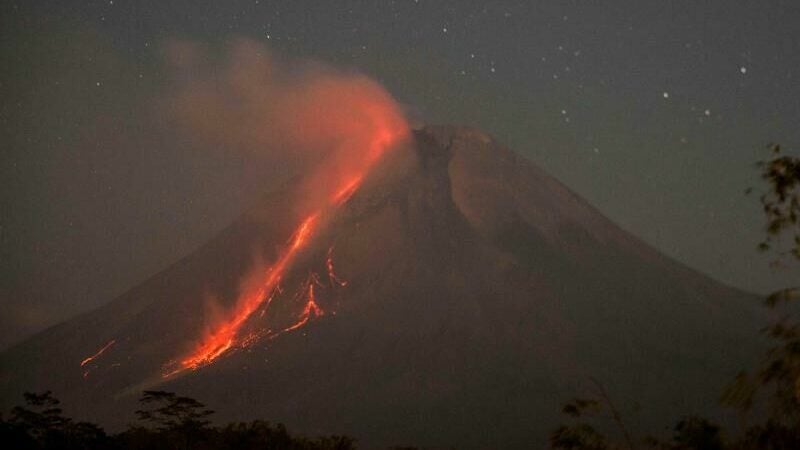 Earlier today, Indonesia’s most active volcano, Mount Merapi erupted. The volcano sent a curtain of ash into the air. Red lava also gushed from its crater.

The eruption happened early this morning and shot clouds around 3.5 kilometres away from the volcano. This led to the nearby community being showered in grey ash. Further, this is Mount Merapi’s biggest lava flow since officials raised its danger level, last November.

Evacuation orders have not been given and no injuries/causalities have been reported.

However, residents have been instructed to avoid the area within a 5 kilometre radius of Mount Merapi, says Indonesia’ geological agency.

“Residents should avoid volcanic ash and they’ve been warned about potential lava flows in the area surrounding Merapi,” says the agency.

Back in 2010, more than 300 people died, and others had to evacuate following the volcano’s major eruption. In 1994, an explosion from the volcano claimed 60 lives. Then, in 1930, 1,300 people were killed when the volcano erupted.

Indonesia is the host to regular seismic/volcanic activity as it is located on the “Ring of Fire”, named for its collection of colliding tectonic plates. Mount Merapi is noted as the most active of the country’s 120 active volcanoes.

Last month, a volcano eruption in the Philippines forced thousands of residents to evacuate.

Dedinbed
What did volcano say to his volcano girlfriend  .?  I lava you ..

Faraday
Fester
Just a guess but I bet the first two posts are not from earth scientists.