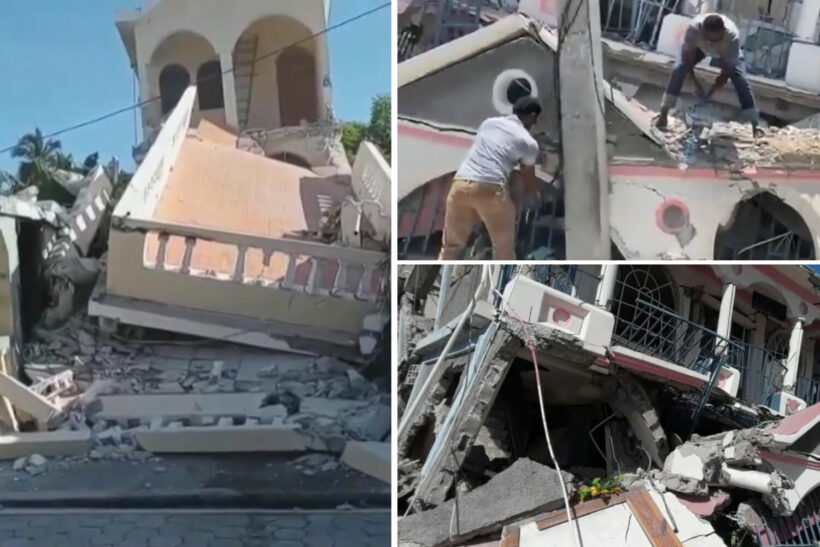 PHOTO: A 7.2 magnitude earthquake has wreaked havoc on Haiti. (via ABC News)

Devastation has hit Haiti as a catastrophic 7.2 magnitude earthquake rocked the struggling Caribbean nation at 8:30 am local time (7:30 pm last night in Thailand time). At least 300 people are dead but experts predict that number could rise to the tens of thousands. There is widespread destruction with homes and buildings collapsed, and Prime Minister Ariel Henry has declared a month-long state of emergency after flying over the country to survey the damage.

The epicentre of the earthquake was about 5 kilometres from the town of Petit Trou de Nippes in the western part of Haiti, about 150 kilometres from the capital Port-au-Prince. Churches, hotels, schools and other buildings in the area have been turned to rubble and it’s feared that many remain trapped.

This earthquake is more powerful than the 7.0 quake that hit Haiti in 2010 and several aftershocks yesterday of at least magnitude 5 have been reported. The 2010 earthquake did immeasurable damage to the poor country and it’s estimated nearly a quarter of a million people died; Haiti still has not recovered from that quake over a decade ago.

The country has suffered recently after just one month ago President Jovenel Moise was assassinated, and the humanitarian crisis may only get worse as Tropical Storm Grace is now approaching the island.

Port-au-Prince has not reported major damage so far, but in the west of the country, many people are unaccounted for and at least 1,800 injuries have been reported. Hospitals are overwhelmed with hurt patients and in some facilities the injured are being treated outside of the overflowing hospitals.

Emergency teams and citizens have worked quickly to pull people from the debris. Much of the population of Haiti is at risk of subsequent landslides, with some blocking major highways, especially around the nearest major city of Les Cayes.

Two hotels, 3 schools, 7 churches and about 950 homes have been confirmed to have been destroyed by the earthquake so far, but the ports and airports of Haiti have been reported to have not suffered major damage. Telecoms infrastructure also remains operational so vital communication on the island is still possible. Damage has been reported on an additional 723 homes, 7 schools, 3 healthcare facilities, and one prison.

Earlier this month an earthquake with a 5.9 magnitude hit Indonesia, but no major damages or casualties were reported. Thailand also experienced several small earthquakes last month.

AussieBob
Never hear anything but bad news from Haiti. And this is another one in a long list.
MikeW
Now people can donate tens of millions of dollars that government officials can steal to benefit theirselves instead of the people same as the last time when instead of fixing the infrastructure they built a new presidential palace