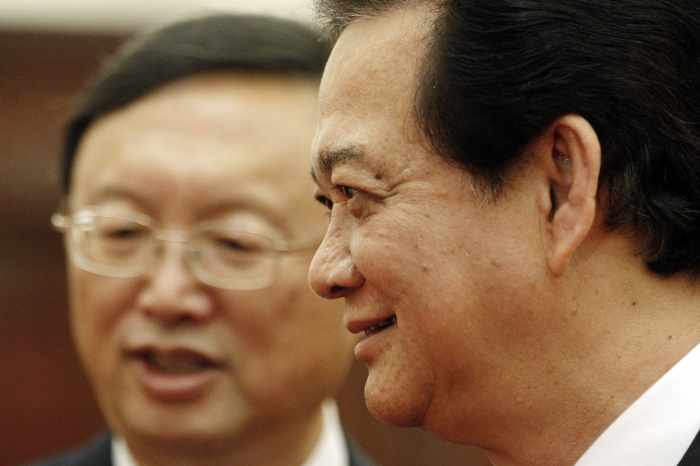 PHUKET: China’s top diplomat scolded Vietnamese officials during talks in Hanoi on Wednesday for “hyping up” a row over a Chinese oil rig drilling in disputed waters in the South China Sea, in tough comments that suggest relations will remain rocky.

Yang, who outranks the country’s foreign minister, made the remarks in a meeting with Vietnamese Deputy Prime Minister and Foreign Minister Pham Binh Minh.

Before the visit, experts had said many obstacles remained to resolving one of the worst breakdowns in Sino-Vietnamese relations since the neighbours fought a brief border war in 1979.

Among them is Beijing’s demand for compensation in the wake of anti-Chinese riots that erupted in Vietnam after the drilling platform was deployed on May 2.

“The most urgent thing is for Vietnam to stop its interference and harassment, stop hyping up the issue and stop whipping up disagreement to create new disputes, and properly deal with the aftermath of the recent serious incidents of violence,” Hua said, describing Yang’s comments.

Yang later met Prime Minister Nguyen Tan Dung and was due to have talks with the head of Vietnam’s ruling communist party before attending a dinner hosted by Minh.

No news conferences are planned. Vietnam has yet to make any statement about the talks.

Yang’s visit is the highest-level direct contact between the two sides since the rig was parked 240 km (150 miles) off the coast of Vietnam.

Vietnam says the platform is in its 200-nautical mile exclusive economic zone and on its continental shelf. China has said the rig is operating completely within its waters near the Paracel Islands, which are occupied by China.

“State Councilor Yang Jiechi said China and Vietnam’s relations are facing difficulties at the moment because for more than a month, Vietnam has been continually illegally harassing Chinese drilling operations in the waters near the Paracel Islands,” Hua said.

“Yang stressed that the Paracel Islands are China’s inherent territory and that there exists no dispute about this.”

Nevertheless, both sides believed the talks were “frank and constructive”, Hua added.

Earlier, Yang and Minh shook hands formally in front of reporters at a government guesthouse. Outside the building, neither country’s national flag was flying, as is customary when senior foreign visitors attend meetings in Hanoi.

Sino-Vietnamese ties have been largely frozen since early May, with both sides accusing the other of inflaming the situation. Dozens of Vietnamese and Chinese coastguard and fishing vessels have repeatedly squared off around the rig, resulting in a number of rammings and collisions.

Vietnam’s official Tuoi Tre (Youth) newspaper said Chinese ships did little to try to impede Vietnamese boats in the area on Tuesday. It quoted a senior Vietnamese naval official as saying the Chinese ships had been less aggressive, suggesting an effort to dial down tensions on the water ahead of Yang’s visit.

While communist parties rule both countries and trade has taken off in recent years, Vietnam has long been suspicious of its giant neighbour, especially over China’s claims to almost the entire South China Sea. Ordinary Vietnamese are also quickly angered by any perceived bullying from China.

The Philippines, Malaysia, Brunei and Taiwan also have claims to parts of the potentially energy-rich waters.

The deployment of the Haiyang Shiyou 981 rig triggered anti-Chinese riots in Vietnam in which four people were killed during a rampage of destruction and looting of factories believed to be owned by Chinese companies. Many of the factories were Taiwanese-owned.

Vietnam detained several hundred people in the aftermath of the violence. Around a dozen people have been tried and given jail terms of up to three years.

China has said the rig will explore until mid-August. It has a good chance of finding enough gas to put the area into production, Chinese industry experts have said.