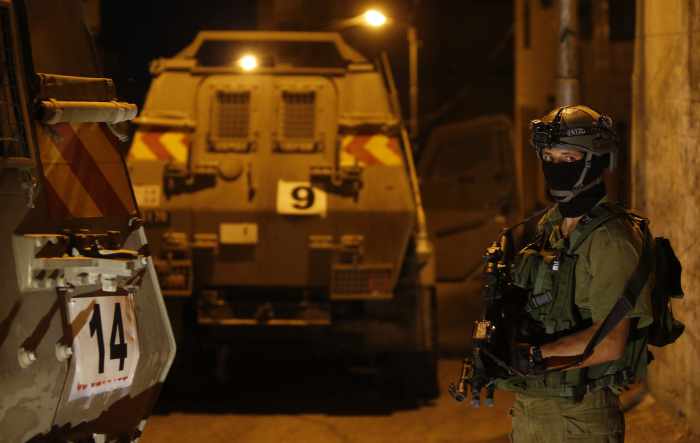 PHUKET: Israel re-arrested 51 Palestinians freed in a 2011 prisoner swap deal, the army said on Wednesday, in the sixth day of a hunt for three missing teenagers believed abducted in the occupied West Bank.

Israel accuses Hamas Islamists of kidnapping the seminary students, who disappeared on Thursday while hitchhiking from a Jewish settlement. There has been no word from them since, nor any public claim of responsibility or ransom demands – including by Hamas, though neither has it denied involvement.

A military spokesman said more than 65 Palestinians were detained overnight, including 51 who were part of a group of 1,027 prisoners released by Israel three years ago in return for soldier Gilad Shalit, who was seized by Hamas in 2006.

“We have two efforts ongoing in parallel. First is to bring back the boys, and the second is to take a toll on Hamas for its actions,” spokesman Lieutenant-Colonel Peter Lerner said.

Palestinians said the majority of those re-arrested were affiliated with Hamas, and accused Israel of reneging on the prisoner-swap deal, which was partially brokered by Egypt.

“What Israel is doing has nothing to do with security, but is a policy of revenge,” said Qadoura Fares, chairman of the Palestinian Prisoners Club, which advocates on behalf of Palestinians in Israeli custody.

An Egyptian official said that Cairo, which is in contact with Hamas and other Palestinian factions, was helping Israel gather information that might lead to the missing teenagers.

But the official, who spoke to Reuters on condition of anonymity, denied Israeli and Palestinian media reports that Egyptian mediation was already under way to return the boys.

“There is a flow of information (between Egypt and Israel), but we are still short of information, so there is no negotiation,” the official said.

Israel wants to make clear to Hamas it will pay a high price for the abduction. Prime Minister Benjamin Netanyahu was swift to praise the latest arrests, which brought the total number of those detained to 240.

“The operation tonight in which Hamas terrorists were arrested, including some who had been freed in exchange for the return of Gilad Shalit, is a component with an important message in a series of many actions,” he said in a statement.

Since the disappearance of Gil-Ad Shaer and U.S.-Israeli national Naftali Fraenkel, both aged 16, and Eyal Yifrah, 19, Israeli raids have spread from house-to-house searches in Hebron, a Hamas stronghold, to Palestinian towns and cities across the West Bank.

Lerner said the army had raided institutions that provide civilian support for Hamas, including the group’s Al-Aqsa radio station. He said computers and documents were seized.

“It’s a multi-dimensional operation, both overt and covert and indeed, it is going to strike a substantial blow to Hamas, its infrastructure, its institutions, its lifeline and everything that keeps it going,” he said.