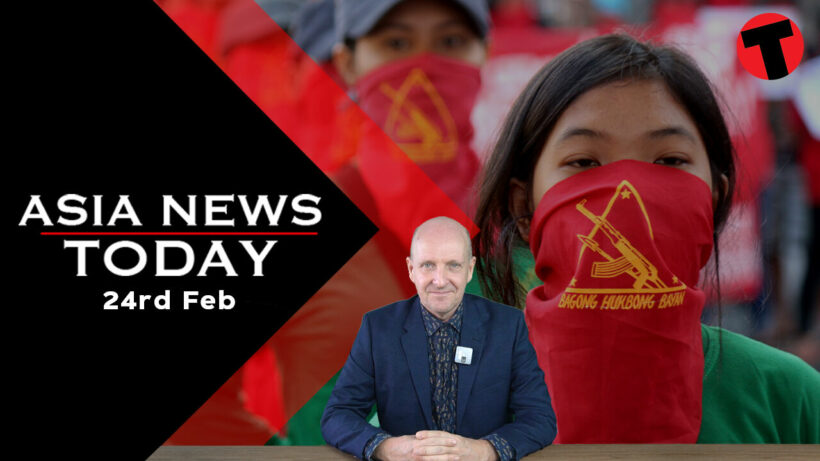 South Korea’s PM is calling for calm after a record number of Covid infections, amid warnings that the latest surge is still yet to peak. He says that serious cases and deaths were still at “manageable levels”, after health authorities reported 171,452 new infections yesterday, a sharp increase from the 99,573 cases a day earlier and the previous all-time high of around 110,000.Despite the rise in cases, the Korean Disease Control and Prevention Agency cites data showing that people infected with the highly transmissible Omicron variant were almost 75% less likely to become seriously ill, end up in hospital or die compared to the earlier Delta variant. More than 86% of South Korea’s 52 million people have been double vaccinated and nearly 60% have received a booster shot.

A diplomat at the Japanese Embassy in Beijing has been detained temporarily by authorities… this from the Japanese Foreign Ministry. The Japanese government has already lodged a formal protest with China through diplomatic channels, and the Foreign Minister told reporters yesterday…. “We cannot overlook the incident and it is absolutely unacceptable.”But the Chinese Embassy in Tokyo says the protest is unreasonable, claiming that the diplomat was being investigated in accordance with the law after acting inappropriately, without elaboration.The embassy also said that Japan should respect China’s laws and was responsible for the behaviour of its diplomats. According to the Japanese Foreign Ministry, the staffer was detained on Monday while on legitimate official business, despite disclosing his profession to the authorities. The diplomat was released a few hours later after questioning with Chinese authorities and was not physically harmed.

Refugees fleeing from their burning houses in Kayah State by Burmese junta forces are facing food shortages. The Kayah State is a region of Myanmar, bordering Thailand’s western border. Reports say little humanitarian aid is reaching them. 170,000 people have been displaced by fighting in the region, with daily clashes between military forces and local opposition clans.Banya, the Director of the Karenni Human Rights Group, told The Irrawaddy that even the camps that have received rice from the Save the Children organisation will soon run out. Other refugee camps are already facing food shortages. There are now around 100 camps for the internally displaced refugees in the Kayah State. For their part, Save the Children have halted their humanitarian operations in Kayah after two members of the organisation were killed by the Burmese military forces in back in December last year. Their bodies were subsequently burned.

Malaysia’s PM, Ismail Sabri Yakob is undertaking his first official visit to Thailand as Malaysia’s prime minister today. He’ll be meeting with his Thai counterpart, PM Prayut Chan-o-cha to discuss bilateral cooperation, vaccines, and the reopening of the countries’ shared border. The Thai/Malaysia border are home to a long-running separatist insurgency that’s resulted in the deaths of over 7,000 people. Thai officials are expected to raise the issue of recent rebel attacks in the southern Thailand region. Malaysia has been brokering peace talks between Thailand and the Malay-Muslim rebels.Ismail Sabri, who was appointed as PM by Malaysia’s king last August, will also be meeting Malaysians in Thailand during his visit. In Phnom Penh, the Malaysian PM is scheduled to hold meetings with the long-serving Cambodian PM Hun Sen. Cambodia is the current chair for ASEAN, a role that is swapped around annually within the 10 member states.

The Philippine government has officially branded 16 such-described left-leaning groups as “terrorist” organisations, claiming that they funnel money to communist insurgents. These claims made in a document from the Anti-Terrorism Council in the Philippines. The council describes the groups as “underground organisations” but fully functioning fronts for the outlawed Communist Party of the Philippines and its military wing, the New People’s Army. The communist party, which has been waging a 50 year long insurgency against Manila, rejected the allegations yesterday as “baseless.”The country’s National Security Adviser says the decision was “based on verified and validated information, as well as testimonial and documentary evidence” citing the 2020 Anti-Terror Act.

An Australian man has been found dead in a villa in Bali yesterday. It is the third death of a foreigner under similar circumstances so far this year. Bali has only recently accepted its first international flight this month after a drought of international travel lasting nearly 2 years. The body of the 69 year old was found on a couch by two Balinese security officials who were roaming the neighbourhood collecting donations for a forthcoming Balinese festival. They noticed that the man’s motorbike was still parked in his garage but were unable to raise a response so sought permission to enter the property. Balinese Police are still investigating the cause of death. His body was taken to the local hospital for autopsy and his embassy and family contacted. Police believe there was no foul play involved in the man’s death.

Finally, this week commemorates an important event in international diplomacy when the US President visited China. Former President Nixon arrived in Beijing on February 21, 1972 and stayed for a week visiting the secretive country. It was the first visit by a sitting US president, and broke a stand-off between the two nations that had frozen ties since the Communist party victory in 1949. The visit, and the detente that followed reset the geopolitics of the cold war at the time. The remarkable trip had all the fanfare of a friendly state visit, with trips to the Great Wall and the Ming tombs, plus a brief meeting with the ageing Mao Zedong. There were hours of long tortured conversations with Premier Zhou Enlai through interpreters from both sides and, finally, a communiqué issued at the close of the trip in Shanghai.

Marc26
3 hours ago, Soidog said: Well it can’t do any harm that’s for sure. Maybe one positive from Covid is that it has raised the awareness of many responsible people about the spread of a virus. I think we are…

King Cotton
7 minutes ago, LoongFred said: It's always a balance. In the company I worked at employees got up to 15 days off sick plus vacation time and holiday time. They got sick leave at the beginning of…