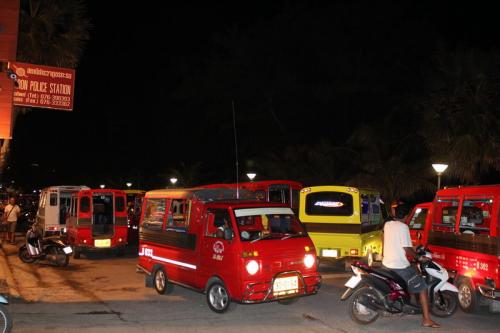 PHUKET: Tuk-tuk and taxi drivers who established a road blockade in Karon last night will take further action if a meeting at 2pm today does not resolve a dispute over Russian tour operators undercutting local prices, the Phuket Gazette was told.

Karon Kamnan Winai Chidchiew broke the news after about 100 tuk-tuk and taxi drivers blockaded the Karon beachfront road at about 10pm last night.

To drive their point home, the drivers staged the blockade right in front of the newly established Karon Police Station.

The Russian tour counters have set their prices so low that local tuk-tuk drivers cannot compete, he explained.

“Worse, they are telling tourists not to use tuk-tuks or taxis in Kata and Karon. The tuk-tuk and taxi drivers in Karon cannot take this anymore,” he said.

While talks ensued, the protestors agreed to open one lane to allow traffic to pass.

The blockade disbanded at about 11pm, but only after Lt Col Narong agreed to the protestors’ primary demand of closing all tour service counters operated by Russian tour companies in Kata-Karon until a long-term solution is reached.

The second demand made at the blockade was for a meeting to be held at 2pm today at the Kata-Karon Municipality offices with all relevant government department chiefs present so a long-term solution could be reached.

The protestors also asked for Russian embassy representatives to be present, such as the Russian honorary consul for Phuket, Soopakij Chearavanont.

Mr Winai expressed concern that a loophole in foreign worker regulations may have made the current confrontation possible.

“I have been told that some sections of the Alien Workers Act have been changed and this is now allowing foreigners to start working in areas that were previously reserved for Thais only,” he said.

Just over 10 years ago to the day, a blockade by Kata-Karon taxi and tuk-tuk drivers won the drivers first choice against local safari tour companies from depriving them of customers.

That blockade also took only one hour to achieve the tuk-tuk and taxi drivers’ goal of protecting their livelihoods.