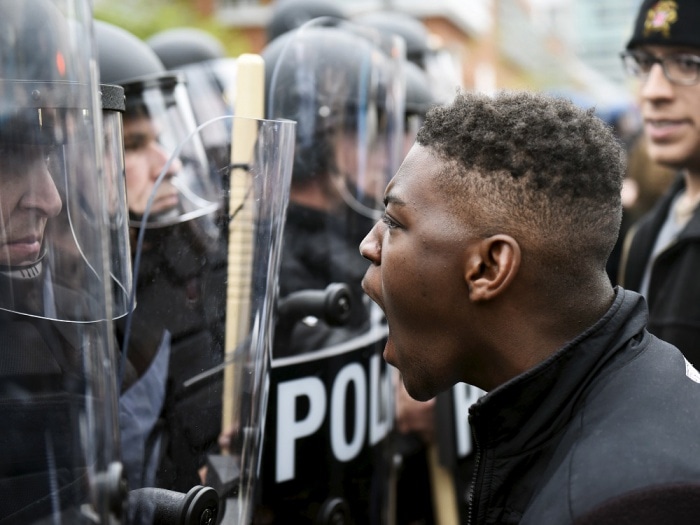 PHUKET: As night falls on Baltimore on Tuesday, thousands of police and National Guard troops fanned out to enforce a new curfew and prevent further violence as the mayor fended off criticism that she responded sluggishly to a night of rioting, looting and fires.

More than 3,000 police from Maryland, New Jersey and the District of Columbia, and National Guard members in helmets, took up posts in front of businesses and hospitals in Baltimore a day after the worst rioting in the United States in years.

Shops were looted, buildings burned to the ground, 20 officers injured and police arrested more than 250 people in the violence that erupted following Monday’s funeral of a 25-year-old black man who died in a hospital on April 19 a week after sustaining injuries in police custody.

For nearly a week after Gray died from a spinal injury, protests in Baltimore had been peaceful and Mayor Stephanie Rawlings-Blake said she acted cautiously on Monday because she wanted to avoid a heavy-handed response that would incite more violence.

“It’s a very delicate balancing act, when we have to make sure that we’re managing but not increasing and escalating the problem,” said Rawlings-Blake, 45, an African-American and Democrat who grew up in the city 40 miles (64 km) from Washington, D.C.

Maryland Governor Larry Hogan said he had called Rawlings-Blake repeatedly Monday but that she held off requesting the National Guard until three hours after looting started.

“The mayor of Baltimore had the city of Baltimore police on the ground. Quite frankly, they were overwhelmed. All the rest of the (boots) on the ground came from us,” the Republican governor said the day after declaring a state of emergency in the largely black city.

Rawlings-Blake imposed a one-week curfew but stressed the need to respond in a way that did not incite more violence.

Bars and restaurants were shutting down early since they did not expect clients due to the 10 p.m. curfew for all adults, which will last the rest of the week.

“We have no exceptions other than for medical or coming and going from work. We will be stopping people who are out after curfew. We are taking that seriously. We don’t want to engage in any forceful action,” Police Commissioner Anthony Batts told reporters.

Peaceful protesters marched through some Baltimore streets on Tuesday, but there was no sign of the rock- and brick-throwing that set off a night of looting and arson that burned 19 buildings and left one person in critical condition.

“They tore the city down last night, and today we’re trying to rebuild it again,” said Perry Hopkins, who formed a line of men from the community separating police from the crowd in the afternoon.

Volunteers armed with brooms cleaned up debris from burned out and looted buildings in the city of 620,000 people, where schools, many businesses and some government offices closed until security improved.

The security crisis disrupted the city’s daily routines. In a rare move, the Major League Baseball game between the Baltimore Orioles and Chicago White Sox will be played as scheduled Wednesday but closed to the public.

Acrid smoke hung over the streets and the federal Bureau of Alcohol, Tobacco, Firearms and Explosives said it was sending two teams to Baltimore to investigate the multiple blazes on Monday night.

Gray was arrested on April 12 while running from officers. He was taken to the police station in a van, with no seat restraint and suffered a spinal injury.

Six officers have been suspended, and the U.S. Justice Department is investigating possible civil rights violations.

“There’s no excuse for the kind of violence that we saw yesterday,” said President Barack Obama, who said he spoke to the governor and the mayor. “It is counterproductive.”

Obama also said at a news conference the problems in places such as Baltimore were not new and need to be addressed by everyone.

“We can’t just leave this to the police,” Obama said, adding that “we as a country have to do some soul searching. This is not new. It’s been going on for decades.”

Almost a quarter of people in Baltimore live below the poverty line and decayed, crime-ridden areas of the city inspired the gritty television police drama “The Wire.”

Monday’s ransacking of stores, pharmacies and a shopping mall and clashes with police in riot gear was reminiscent of rioting in Ferguson, Missouri, in 2014 after authorities declined to indict a white police officer who shot dead an unarmed black teenager.

Baltimore police Captain John Kowalczyk told reporters that the city had prepared for protests by teenagers on Monday. But as the violence increased, older people were involved.

“When we deployed our officers yesterday, we were deploying for a high school event,” Kowalczyk said. “I don’t think there’s anyone in the country that would expect us to deploy with automatic weapons and armored vehicles to an event with 13- 14- and 15-year-olds.”