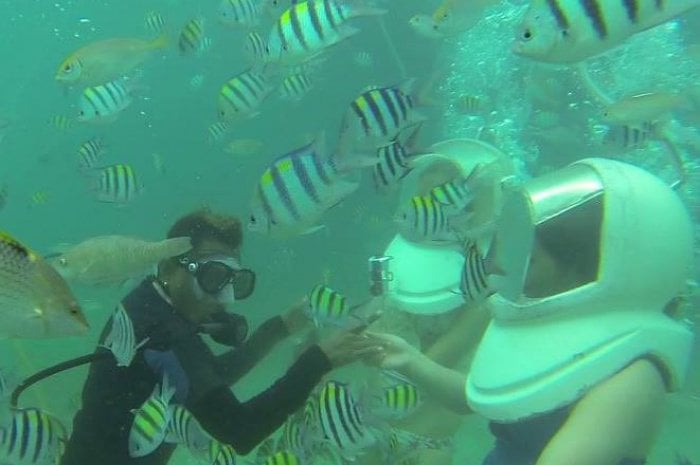 The video showed tourists on a sea-walking tour handling corals and other marine life, and hand-feeding fish entire loaves of bread.

Following days of intense criticism, including accusations that the video promoted ‘marine animal abuse’, the video was removed yesterday.

Gift Box Travel posted a statement on its Facebook page denying that it was a sea-walking company.

“We are just a normal tour company. The video clip was taken by staff during a familiarization trip to Phuket on May 1-5 last year. We bought a tour package, which included the sea walking at Coral Island.

“We apologize for posting this kind of inappropriate video. We did not anticipate such a public reaction to this, and we will not support this kind of activity.”

Regardless, Tanet Munnoy, the chief of the Department of Marine and Coastal Resources (DMCR) Region 5 office in Phuket, will meet with Phuket Governor Nisit Jansomwong within the coming week to discuss the issue, the Phuket Gazette was told today.

“They will meet with representatives from other agencies to see to what extent can they take action on this,” said Ukkrit Satapoomi, director of the DMRC’s Phuket Marine Biological Center.

Mr Ukkrit explained that he was not against sea walking, but not at the expense of interfering with marine life.

“Sea walking is fine if it does not affect marine life and is carried out at an appropriate place,” he told Gazette this afternoon.

However, Mr Ukkrit said that he would call for officials to inspect sea-walking operations at Coral Island to ensure that marine life there is not directly affected.

“If it does do harm, then they will have to move their operations to another place,” he said.

Mr Ukkrit added that he would prefer representatives from a broad cross-section of interests participate in the upcoming discussions.

“I think officials from the Phuket Marine Office, Ministry of Tourism and Sports, Fisheries Department and other relevant offices should join the meeting,” he said.

“That way we can at least learn why those businesses [at Coral Island] have been allowed to remain there for so many years.”

Mr Santi went on record earlier this year saying that he saw no issue with tourists hand-feeding fish “small amounts of bread”, when he inspected a sea-walking tour at Coral Island in January (story here).

“From a tourism point of view, as long as tourists do not interfere with corals, I see no harm with sea-walking,” he told the Gazette today.

“But I think it is good idea to have a meeting so officers from relevant agencies can suggest their ideas and express their opinions as to whether or not sea walking should be allowed.

“We have to come up with a conclusion soon.”