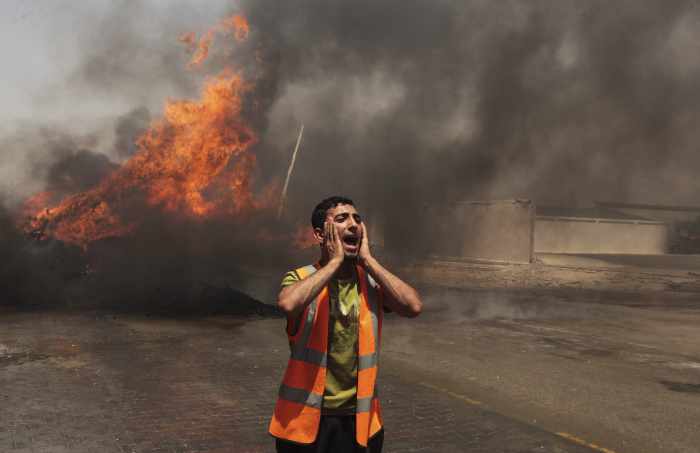 PHUKET: Thousands fled their homes in a Gaza town on Sunday after Israel warned them to leave ahead of threatened attacks on rocket-launching sites, on the sixth day of an offensive that Palestinian officials said has killed at least 160 people.

“Those who fail to comply with the instructions will endanger their lives and the lives of their families. Beware,” read a leaflet dropped by the Israeli military in the town of Beit Lahiya, near the border with Israel.

Militants in the Islamist-ruled Gaza Strip kept up rockets salvoes deep into the Jewish state and the worst bout of Israel-Palestinian bloodshed in two years showed no signs of abating despite mounting international pressure to cease fire.

A Palestinian woman and a girl, aged 3, were killed in Israeli air strikes early on Sunday, Gaza’s Health Ministry said. Hours earlier, the ministry said 18 people were killed when the house of Gaza’s police chief was bombed from the air in the single deadliest attack of Israel’s offensive.

Despite intensified Israeli military action – which included a commando raid overnight in what was Israel’s first reported ground action in Gaza during the current fighting – militants continued to launch rocket after rocket across the border.

A long-range salvo on Sunday morning triggered air raid sirens at Tel Aviv’s Ben-Gurion international airport, which has not been hit in the hostilities and where flights have been operating normally, and some city suburbs.

On Saturday night, Hamas – the Islamist movement that rules Gaza – made good on a threat to send rockets streaking toward Tel Aviv at 9 p.m. (1800 GMT) and other areas in heavily populated central Israel.

Hundreds of thousands of Israelis sought shelter as Palestinians in the streets of Gaza City cheered the launchings, the biggest strike yet on the Tel Aviv metropolitan area.

Those rockets and the ones unleashed on Sunday were intercepted by the Israeli-built, and partly U.S.-funded, Iron Dome missile defence system that has proved effective against Hamas’s most powerful weaponry.

No one has been killed by the more than 800 rockets the Israeli military said has been fired since the offensive began, and during Saturday night’s barrage, customers in Tel Aviv beachfront cafes shouted their approval as they watched the projectiles being shot out of the sky.

The Gaza Health Ministry said at least 160 Palestinians, including about 135 civilians – among them some 30 children, have been killed six days of warfare, and more than 1,000 have been wounded.

Israeli leaflets dropped on Beit Lahiya, where 70,000 Palestinians live, said civilians in three of its 10 neighbourhoods were “requested to evacuate their residences” and move south, deeper into the Gaza Strip, by 12 p.m. (0900 GMT).

The Gaza Interior Ministry, in a statement on Hamas radio, dismissed the Israeli warnings as “psychological warfare” and instructed those who left their homes to return and others to stay put.

The warnings cited roads that residents could use safely and said Israeli forces intended to attack “every area from where rockets are being launched”. The military did not say in the leaflet whether the strike would include ground troops.

It was the first time Israel had warned Palestinians to vacate dwellings in such a wide area. Previous warnings, by telephone or so-called “knock-on-the-door” missiles without explosive warheads, had been directed at individual homes slated for attack.

At least 4,000 people fled Beit Lahiya and crowded into eight U.N.-run schools in Gaza City on Sunday, a spokesman for the United Nations Relief and Works Agency said.

Some arrived on donkey carts filled with children, luggage and mattresses, while others came by car or taxi. One man, still in his pajamas, said some residents had received phone calls warning them to clear out.

“What could we do? We had to run in order to save the lives of our children,” said Salem Abu Halima, 25, a father of two.

Israel says a ground invasion of Gaza remains an option, and it has already mobilised more than 30,000 reservists to do so, but most attacks have so far been from the air, hitting some 1,200 targets in the territory.

International pressure on both sides for a return to calm has increased, with the U.N. Security Council calling for a cessation of hostilities and Western foreign ministers due to meet on Sunday to weigh strategy.

Hostilities along the Israel-Gaza frontier first intensified last month after Israeli forces arrested hundreds of Hamas activists in the Israeli-occupied West Bank following the abduction there of three Jewish teenagers who were later found killed. A Palestinian youth was then killed in Jerusalem in a suspected Israeli revenge attack.

Giving details of the naval commando operation early on Sunday, Lieutenant Colonel Peter Lerner, an Israeli military spokesman, said four members of the force were wounded in exchanges of fire with militants but the long-range rocket launching site they attacked was hit.

Hamas said its fighters had fired at the Israeli force offshore, preventing them from landing. Lerner said the forces had “completed their mission”.

Israel said it has carried out 1,320 attacks on militant targets, that have included homes – which it described as command centres – warehouses, smuggling tunnels and rocket launching and manufacturing sites.

Palestinian residents say some of the dwellings hit in the attacks did not belong to militants and that attacks on homes have caused numerous civilian casualties.

A Hamas source commenting on the air strike against the Gaza police chief’s home said the officer, Tayseer Al-Batsh, was in critical condition. All of those killed in the air strike. which television footage showed was reduced to piles of rubble, were members of Al-Batsh’s family.

Ashraf Al-Qidra, spokesman for the Gaza Health Ministry, said 45 people were wounded in the bombing. An Israeli teenager was wounded on Sunday by a rocket that struck the southern town of Ashkelon, emergency services said.

Israel says it tries to avoid civilian casualties and accuses of Hamas of putting innocent Gazans in harm’s way by placing weaponry and gunmen in residential areas.

Israel’s north also came under rocket fire late on Saturday, from Lebanon. Hamas, which is not known to have a presence in southern Lebanon, claimed responsibility for the attack, which Israel suspects was launched by other Palestinian militants.