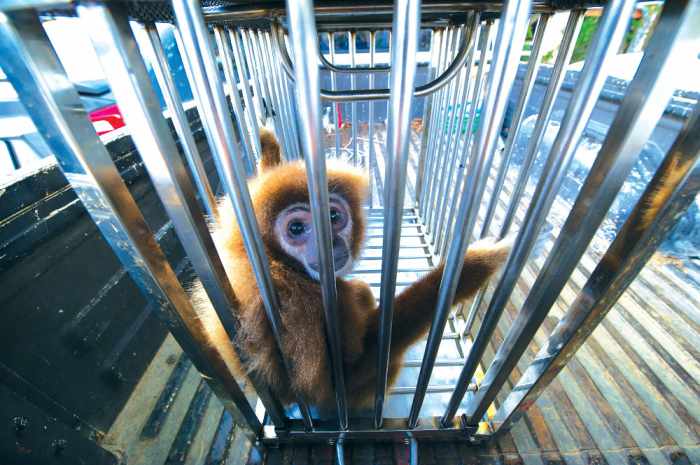 PHUKET: A network of light aircraft owners known as the Flying Scouts are pitching in to save the environment through a number of innovative projects, one of which was a recent “gibbon airlift” from Phuket to the animals’ new home in Chiang Mai.

Most island residents are familiar with the good work done by the Gibbon Rehabilitation Project (GRP) in Thalang. Established back in 1990, the GRP sanctuary and education center in the Khao Phra Thaew forest reserve in Pa Khlok is run by the Wild Animal Rescue Foundation, or WARF.

To those unfamiliar with the seamier side of Phuket’s tourism trade, cute baby gibbons are among the many animals that are poached from their natural habitats and used by touts as props to induce ignorant tourists to pay to have their pictures taken with them.

At the GRP facility, rescued gibbons are gradually moved further and further from humans until they are deemed fit to survive on their own, after which time they are released into the wild. The entire process can take five years because the baby gibbons’ mothers are typically shot dead in the process. Thus, their offspring become totally dependent on humans from an age when they should be learning how to forage, fend for themselves and survive in the wild.

When they reach maturity and grow canines at about six years of age, they can turn aggressive. Sadly, when they are not so cute anymore, their callous handlers often cage them, dump them or even kill them – and then go in search of a new baby.

Unfortunately, space is running out at Khao Phra Taew, the last place on the island with a suitable habitat for gibbons. The good news is that the WARF founders, including the late Tony Smallwood, spent years of research before finding a suitable forest up north, one with a local community committed to reintroducing gibbons that were poached into extinction in that region in the 1980s.

Tony, a keen aviator who sadly passed away last year, helped discover the village of Baan Chum Pee in the Mae On National Forest Reserve in the foothills of the Doi Saket hill range, where local villagers are solidly committed to protecting the reintroduced primates. Only village elders there are old enough to remember the morning call of the gibbons, and are now keen to rectify the mistakes of the past.

The final step in getting the gibbons back into the wild up north is problematic, as Chiang Mai is over 1,200 kilometers from Phuket and an arduous journey even by VIP bus. The move necessarily involves re-caging the gibbon pairs after they have finally gotten used to freedom – a traumatic experience to say the least.

Fortunately, members of The Flying Scouts made what could have been a miserable journey much easier by organizing a pilot (pardon the pun) “gibbon airlift”. One of The Flying Scouts trustees, who asked that his name not be published, spoke to the Phuket Gazette’s ‘Up In The Air’.

“For the initial gibbon airlift flights that were conducted from April 1 to 3, we used HS-TOM, a Piper Propjet. This is a single engine, six seat turboprop. We also plan to use a six-seat, twin engine Piper Comanche for future airlifts.

“Both Phuket Airpark and Nok Airfield in Chiang Mai kindly donated use of their facilities. We are also planning to soon use Best Ocean Airpark in Bangkok to airlift a sick female gibbon named Bambam that needs a cataract operation,” he added.

The WARF team had initially planned to release Bambam, her mate Santi and their male baby PeePoo. But due to the medical complications, another pair, Bobby and Songkran, were the first couple reintroduced.

“All of the gibbons were remarkably well behaved passengers, or “VIGs” [Very Important Gibbons] as I called them. Prior to loading them, they objected to the cage covers being placed over the cages the most. That was because it shut them in, preventing them from touching one another.”

“We have since modified the cages so that during the flight the side panels can be opened and they can see and touch each other. This is a learning process for us as well. They were a little subdued, but we had veterinarian Dr Suwit Punnadee on board to monitor them throughout the flight, feeding and reassuring them. To be honest they were no trouble at all, and did not make a mess,” said the trustee, who also piloted the aircraft.

Nok Flying Club member Mike Wilson from the US was also a key member of the team, serving as co-pilot. Together with his wife Harriet, they supplied custom built cages designed specifically for the airlift.

“Mike, a very experienced retired commercial training captain, was just one of a whole host of behind-the-scenes people who got involved to make this happen,” said the trustee.

For more information, links, updates and ways to get involved, visit: theflyingscouts.com; warthai.org; or gibbonproject.org