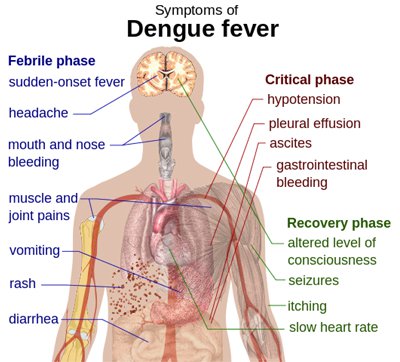 Health officials on Thursday confirmed that two more people have died of dengue fever at the Sultan Thaha Saefuddin general hospital in the Tebo district of Jambi province, which is located on the east coast of central Sumatra.

Jambi administration spokesman Subhi told the Antara news agency that in the last two months, the dengue fever endemic has caused at least 27 deaths. The total number of cases has meanwhile increased to around 800, an increase from 700 at the start of December.

Hendra, the Sultan Thaha Saefuddin hospital spokesperson, said the two latest victims had faced complications because they were late in treating the disease. He said eleven others are still being treated at the hospital for the virus, but it is unclear how many people have been hospitalized in other regional hospitals.

Dengue spreads more often after the rainy season when stagnant water on the streets usually activate the breed of mosquitoes, which transmit and cause the dengue fever. Indonesia’s rainy season normally begins in the month of November and lasts until March.

Pakistan has also faced a severe outbreak of dengue fever this year, killing at least 340 people and infecting more than 32,000 people. The outbreak, which was centered in Punjab’s provincial capital of Lahore, did not follow the typical epidemic cycle as it initially continued to affect people at a constant rate.

The death toll as a result of people consuming illegal liquor in India’s eastern state of West Bengal rose to at least 146 on Thursday, a health official said. Hundreds more have been hospitalized.

The victims became ill on early Wednesday morning after consuming liquor which was being sold at shacks near a railway station in Sangrampur village, which is located near the city of Kolkata. As many as 450 people are believed to have consumed the alcohol.
A district health official who spoke on the condition of anonymity confirmed at least 146 people had died as of late Thursday, while more than 300 others are still being treated at hospitals. Many of them are in a critical condition, and officials believe the death toll will rise further.

“More than 300 patients are already in the hospitals,” Kolkata Mayor Sovan Chatterjee told CNN-IBN. “The condition of the patients are not very good. Shifting to hospitals is not easy, but we are trying our level best to control the situation. It’s an unfortunate incident.”

Most of the victims, many of whom are poor workers, have complained of severe stomach pain, vomiting and chest pain. Samples of the alcohol have been sent for forensic examination to determine what exactly is in the drink.

Meanwhile, at least ten people have been arrested for supplying the illicit alcohol. Angry residents have also demolished the shacks where the liquor was being sold and complained that local police failed to act against the sale of illegal alcohol if the owners paid bribes.

In September, at least 26 people died in several parts of Kenya after also consuming illicit alcohol with extreme levels of methanol. Police said the victims drank from bottles of illegal alcohol known as Yokozuna, which contained fatal levels of methanol.

An elevator at an office building in New York City suddenly moved up on Wednesday morning with its doors open, crushing a woman to death, police said. Two others witnessed the bizarre accident.

The accident happened at around 10.30 a.m. local time on Wednesday at a 28-story building on Madison Avenue. The victim, identified as 41-year-old Suzanne Hart, had stepped halfway onto the elevator when it suddenly shot up, crushing her between the elevator floor and the shaft wall.

Two other people who were on the elevator were not injured, but were treated for trauma after witnessing what was described as a ‘gory’ scene. “People were running and screaming ‘Someone got crushed in the elevator’,” one witness told NBC New York.

Hart was director of new business, content and experience at the Y&R advertising agency, which is a major tenant in the building although it recently announced it would move to a new building. Hart was on her way to her office when she was killed. “I loved her. She was a beautiful person,” her boyfriend told NBC New York.

Peter Stringham, chairman and CEO of Y&R, called it a tragic day. “We are deeply, deeply saddened to confirm that one of our employees has died,” he said. “Our focus at this moment is the well-being of our employee’s family and our larger Y&R family.”

The elevators at the building were previously cited for city building code violations. An investigation is continuing.