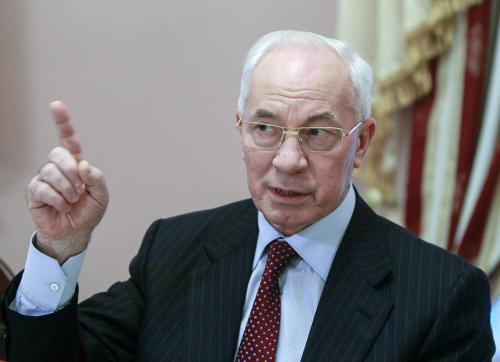 The first concrete concessions by Yanukovich since the crisis erupted two months ago brought cries of ‘Hurrah!’ from several thousand demonstrators on Kiev’s Independence Square, focal point of the protests.

But opposition leaders said they would continue to harness street power to wring even more gains from Yanukovich.

“We have to change not only the government, but the rules of the game as well,” declared boxer-turned-politician Vitaly Klitschko. “We are sure the struggle will continue,” he said.

The 66-year-old Azarov tendered his resignation as parliament met for an emergency session to work out a deal that would satisfy the opposition and end street protests in the capital Kiev and in other cities in which six people have been killed.

Yanukovich quickly accepted his resignation and that of his cabinet. Azarov’s spokesman said first deputy prime minister, Serhiy Arbuzov, a former central bank chief, would step in as acting prime minister while other ministers would stay on in an acting role until a new cabinet had been formed.

Azarov, a loyal lieutenant of Yanukovich since the latter was elected to power in February 2010, said he was stepping down “with the aim of creating extra means for finding a social-political compromise, for the sake of a peaceful settlement of the conflict.”

But in reality he has been publicly humiliated by Yanukovich’s offer at the weekend to give his job to former economy minister Arseny Yatsenyuk, another opposition leader, in an effort to stem the rising protests against his rule.

The opposition has been calling consistently for the resignation of the Azarov government since the crisis started.

But opposition leaders have shied away from the offer of top government posts by Yanukovich, seeing it as a trap intended to compromise them in front of their supporters on the streets.

Yatsenyuk, one of a “troika” of opposition leaders, formally turned down the offer of the top government job on Monday night.

The steward of the heavily-indebted economy through hard times and recession, Azarov backed the decision in November to walk away from a free trade agreement with the European Union – the move which sparked the mass street protests.

And it was Azarov who took the heat in parliament, defending the need for closer economic ties with Russia in a stormy debate with the opposition.

Parliament went into emergency session on Tuesday with ministers loyal to Yanukovich saying they would press for a state of emergency to be declared if the opposition leaders did not rein in protesters and end occupation of municipal and government buildings across the country.

But then Yanukovich loyalists – clearly under pressure from the president and his aides to make a U-turn – voted to repeal anti-protest legislation they had rammed through on January 16.

It was these laws – banning virtually all form of public protest – which sparked a violent turn on the street leading to open clashes between radical activists and police in which six people were killed.

Opposition leaders sought to keep up the pressure on Yanukovich, with Yatsenyuk calling on him to swiftly sign the repeal of the laws into force.

Klitschko said opposition lawmakers would now press for an amnesty for activists detained by police in the unrest and a return to the 2004 constitution which would greatly reduce the present powers of the president.

“These decisions which parliament has adopted are good but it’s only a little progress. We won’t leave here until the system and the Constitution has been changed,” said Ivan, 45, from Lviv region who was at one of the people’s barricades leading down to Independence Square.

“We have been fighting for two months and we do not want to stop now half way along the road. The time for talk is over. Everything is serious now,” said Serhiy from Vinnytsya region in central Ukraine.

Talk of a state of emergency being declared in the former Soviet republic of 46 million made the European Union’s foreign policy chief, Catherine Ashton, hastily bring forward a visit Ukraine and was due to arrive in Kiev on Tuesday.

U.S. Vice President Joe Biden called Yanukovich on Monday to urge the government not to declare a state of emergency and to work with the opposition to bring a peaceful end to unrest.

“(Biden) underscored that the U.S. condemns the use of violence by any side, and warned that declaring a State of Emergency or enacting other harsh security measures would further inflame the situation and close the space for a peaceful resolution,” the White House said.

Though the protest movement began because of Yanukovich’s U-turn on policy towards Europe, it has since turned into a mass demonstration, punctuated by clashes with police, against perceived misrule and corruption under Yanukovich’s leadership.