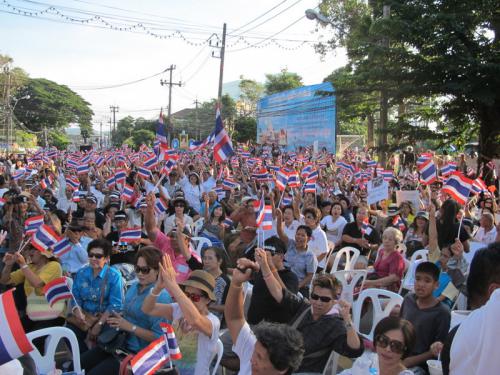 PHUKET: Despite a shortage of officers, the Phuket Provincial Police have vowed to protect voters from any violence on election day with a special task force.

The group of 41 officers will be made up of five fast-response inspectors, 18 undercover officers and 18 officers on standby.

“Officers manning the polling stations have been instructed not to interfere with peaceful protesters, even if they are blockading the polls. However, should an emergency break out, backup officers will be ready to respond,” said Phuket Provincial Police Commander Ong-art Phiwruangnont.

“We don’t want any problems at the polls, and we will avoid any possibility of a fight,” Mr Kittipong said.

Though Thai law requires two police officers per polling station on election day, Phuket stations will only have one.

“We asked for two officers per station, but there are 363 polling areas on the island and not enough available officers,” said Mr Kittipong.

Anyone defying the law – for example, selling alcohol during prohibited times (story here) or buying votes (story here) – will be arrested, Mr Kittipong said, adding that it was against the law for candidates to provide transportation for voters to polling stations.

“It is also illegal to prevent people from voting in the elections. The penalty for doing so is five years imprisonment, up to 100,000 baht fine or both,” said Mr Kittipong.

Mr Kittipong is in a meeting today with Phuket Vice Governor Somkiet Sangkaosuttirak to strategize a response to potential blockades by anti-government protesters.

“At this stage we are not ready to reveal any further information about our plans,” Mr Kittipong told the Phuket Gazette.