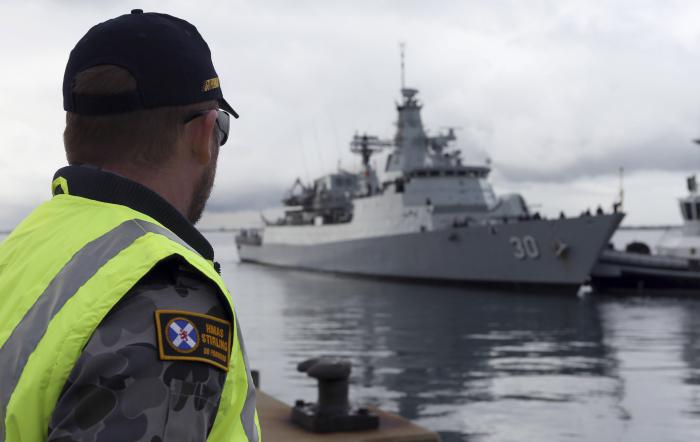 PHUKET: Malaysian police have ruled out involvement of any passengers in the disappearance of a missing jetliner, while Australian officials warned bad weather and a lack of reliable information were impeding efforts to find wreckage from the plane.

Up to 10 planes and nine ships from a half dozen countries on Wednesday scoured a stretch of the Indian Ocean roughly the size of Britain, where Malaysia Airlines Flight MH370 is believed to have crashed more than three weeks ago.

Authorities have not ruled out mechanical problems as causing the disappearance, but say all the evidence suggests the plane was deliberately diverted from its scheduled route from Kuala Lumpur to Beijing.

Malaysia’s police chief said the investigation was focusing on the cabin crew and pilots, after clearing all 227 passengers of possible involvement in hijacking, sabotage or having personal or psychological problems that could have been connected to the disappearance.

“They have been cleared,” national police chief Khalid Abu Bakar was quoted as saying by state news agency Bernama.

The search and rescue teams are in a race against time to locate the plane’s black box recorder, which has an expected battery life of around 30 days and without which it may never be possible to find the wreckage.

Retired Air Chief Marshal Angus Houston, the head of the Australian agency coordinating the operation, said that a lack of reliable flight telemetry and punishing conditions at sea were making the operation even more challenging.

“In other words, we don’t have a precise aircraft location for six hours before the aircraft went into the water somewhere,” he said in an interview with the Australian Broadcasting Corporation.

“The reality is it’s the most complex and challenging search and rescue operation, or search and recovery operation now, that I’ve ever seen.”

The search is now focused on an inhospitable 221,000 sq km (85,000 sq miles) swathe of the southern Indian Ocean some 1,500 km (932 miles) west of the Australian city of Perth. But despite the unprecedented effort, the international team has so far failed to spot any trace of the jetliner.

“Look, it’s one of the great mysteries of our time,” Australian Prime Minister Tony Abbott said in an interview with local Perth radio station Radio 6iX.

“We owe it to the world, we owe it to those families, to do whatever we reasonably can do get to the bottom of this.”

Malaysian Prime Minister Najib Razak was expected to arrive in Perth late on Wednesday to inspect the search and rescue operations, which are being conducted out of RAAF Base Pearce north of the city. He was expected to meet Abbott on Thursday.

Najib will arrive with Malaysia coming under fresh fire for its handling of the incident after authorities there changed their account of the plane’s critical last communication.

Malaysia on Tuesday released the full transcript of communications between the Boeing 777 and local air traffic control before it dropped from civilian radar in the early hours of March 8. (for full transcript, click: https://r.reuters.com/kam28v)

While indicating nothing abnormal, the transcript showed the final words from the cockpit were not the casual “All right, good night” that authorities first reported, but the more standard “Good night Malaysian three seven zero.”

Minutes after the final radio transmission was received the plane’s communications were cut off and it turned back across Peninsular Malaysia and headed towards the Indian Ocean, according to military radar and limited satellite data.

Malaysian authorities have faced heavy criticism, particularly from China, for mismanaging the search, now in its fourth fruitless week, and holding back information. Most of the 239 people on board the flight were Chinese.

Among the vessels due to join the search in the coming days is an Australian defence force ship, the Ocean Shield, that has been fitted with a sophisticated U.S. black box locator and an underwater drone.

Britain is sending HMS Tireless, a Trafalgar-class nuclear submarine with sonar capabilities, to help with the search, Malaysia’s transport ministry said in a statement.

Still, Houston said the challenging search would continue based on the imperfect information with which they had to work.

“It’s vitally important for the governments involved that we find this aeroplane,” he said. “But I’m just pointing out that it won’t be easy given the circumstances that surround this particular search and recovery operation.”