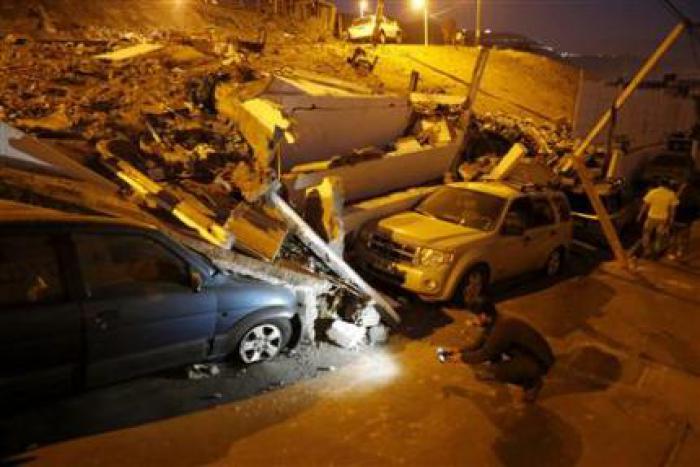 PHUKET: Chilean authorities on Wednesday were assessing the damage from a massive earthquake that struck off the northern coast, causing a small tsunami, but the impact was mostly limited, according to early indications.

Thousands of people who evacuated the country’s low-lying coastal areas returned home on Wednesday morning after authorities called off a tsunami alarm.

The 8.2 magnitude quake that shook northern Chile on Tuesday killed six people and triggered a tsunami that pounded the shore with 2-meter (7-foot) waves.

Authorities evaluated the damage on Wednesday as the ocean waves receded and daylight showed the full extent of the outcome.

Mines in Chile, the world’s No. 1 copper producer, mostly said they were functioning normally, and oil refineries reported normal operations.

The arid, mineral-rich north is sparsely populated, with most of the population concentrated in the port towns of Iquique and Arica, near the Peruvian border.

In Peru, the earthquake led to temporary power outages and evacuations in some southern towns, but did not cause serious damage or injuries.

Chilean President Michelle Bachelet visited the affected area on Wednesday. She declared a disaster zone, promising troops and police reinforcements to maintain order while damage was repaired after landslides blocked a number of roads.

Local television showed smaller fishing vessels badly damaged and overturned in Iquique. Although the tsunami alert was called off, the navy warned that high waves and strong currents could continue, and ports in the area remained closed.

Several smaller aftershocks, some as big as 5.2 magnitude, were registered over Tuesday night and Wednesday morning, according to Chile’s emergency office.

Over 900,000 people were evacuated from the coastline along Chile on Tuesday, according to the government’s emergency office, in a move that local media reported took place in a largely orderly fashion.

Thousands of miles away in Hawaii, residents were warned by the Pacific Tsunami Warning Center of possible sea level changes and strong currents that could pose a danger to swimmers and boaters.

It was too early to estimate financial losses, but they were expected to be much lower than the $30 billion from the devastating 8.8 magnitude quake in 2010, which affected the more densely populated central region, said earthquake expert Alexander Allmann at reinsurer Munich Re.

“The quake has caused severe damage to some buildings in the affected region, but in general the building standards in Chile are comparatively high, allowing buildings and infrastructure to withstand such quakes reasonably well,” said Allmann.

“The small tsunami triggered by the quake is not expected to have caused significant damage.”

Chileans live in one of the most earthquake-prone areas of the world. In 1960, southern Chile was hit by a 9.5 quake, the largest in modern history.

Residents in the area of the latest quake have been expecting “the big one” for many years. The Nazca and South American tectonic plates rub up against each other just off the coast of Iquique, where a “seismic gap” has been building up.

An unusually large number of tremors in the area in recent weeks had led authorities to reinforce emergency procedures, while residents bought emergency rations, and prepared for an eventual evacuation.

“The government of Chile has been working hard to improve the awareness of people living along the coast to the threat from tsunamis,” said Steven Godby, an expert in disaster management at Nottingham Trent University in Nottingham, England.

“Several tsunami drills have taken place since the (earthquake and) tsunami that killed an estimated 500 plus Chileans in February 2010, and recent earthquakes in the region have helped to keep the threat firmly in people’s minds,” he added.