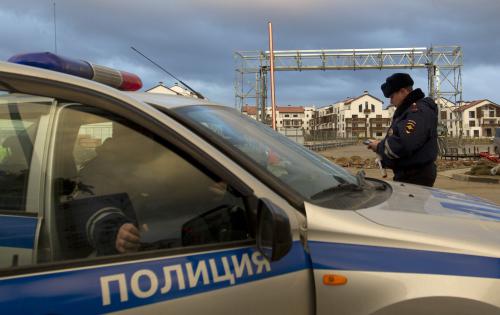 
Russia says militants seized with bomb in south
Reuters / Phuket Gazette
PHUKET: Five members of a banned militant group were arrested in southern Russia on Saturday and a homemade bomb packed with shrapnel was defused, in another security scare weeks before the Winter Olympics in Sochi.

Islamist militants have threatened to attack the games and suicide bombers killed at least 34 people last month in Volgograd, also in southern Russia.

President Vladimir Putin, who has staked his political and personal prestige on the success of the Olympics, has ordered safety measures beefed up nationwide after the attacks.

Russia’s National Anti-terrorism Committee (NAC) said the latest arrests were in Nalchik, a town about 300 km (190 miles) from Sochi in the Caucasus region, where insurgents want to carve out an Islamic state.

“Security forces have detained five members of a banned international terrorist organisation,” the NAC said in a statement received by Russian news agencies. An NAC spokesman confirmed the statement to Reuters.

“The anti-terrorism operation discovered and seized ammunition, grenades and a homemade explosive device packed with shrapnel ready for use,” the statement said.

The weapons were discovered in the course of searching the addresses where the arrests took place, it added.

Nalchik is 100 km from the town of Beslan, the site of a 2004 guerrilla attack on a school which killed 331, half of them children.

An Islamist group in the region, the Caucasus Emirate, led by a former Chechen independence guerrilla commander, Doku Umarov, has urged militants to use “maximum force” to prevent the games, which open on February 7, from going ahead.

Putin crushed separatists in the Muslim province of Chechnya when he rose to power 14 years ago. But the Islamist insurgency spread to neighbouring Dagestan, recruiting fighters from as far afield as Canada.

On Thursday police went on combat alert in the Stavropol region, also in the south, after the discovery of at least five corpses with gunshot wounds and an explosive device.

The head of Russia’s Olympic Committee has said Moscow has taken every possible measure to ensure the safety of the games.

Russian forces went on combat alert last week in Sochi and about 37,000 personnel are now in place to provide security at the games.