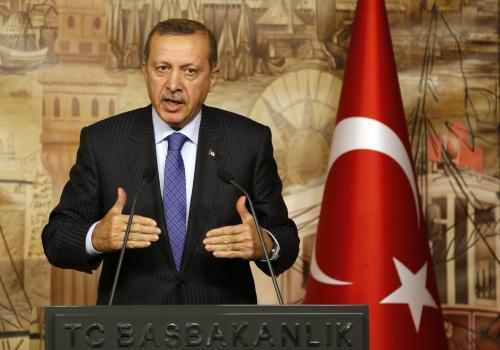 
Turkish PM pushes judicial reforms after parliament punch-up
Reuters / Phuket Gazette
PHUKET: Turkish Prime Minister Tayyip Erdogan vowed on Sunday to forge ahead with judicial reforms which prompted a fist fight in parliament, denying he was trampling on the constitution as the government battles a damaging corruption scandal.

Rival MPs threw punches, water bottles and even an iPad as parliament’s justice commission met on Saturday to discuss a draft bill from Erdogan’s AK Party which would give it more say over the appointment of judges and prosecutors.

Erdogan’s opponents view the bill as an effort by the government to stifle a corruption scandal which has already led to the resignation of three cabinet ministers.

The fight erupted when the head of a judicial union, Omer Faruk Eminagaoglu, arrived with a petition saying the bill would violate the constitution, as argued by opposition MPs, but was not allowed to speak, witnesses said.

“These are not legal professionals, these are the militants of this business,” Erdogan said of Eminagaoglu’s intervention, adding he had no authority to interrupt the commission’s work.

Erdogan has cast the corruption investigation, which poses one of the biggest challenges of his 11-year rule, as an attempted “judicial coup” meant to undermine him in the run-up to local and presidential elections this year.

He has responded by purging the police of hundreds of officers and seeking tighter control over the judiciary.

Erdogan said the justice commission, more than half of whose members are from his AK Party, had voted and concluded that the proposed reforms to High Council of Judges and Prosecutors (HSYK) were legal.

“The commission has done its work and has ruled that there is no violation of the constitution,” he told reporters in Istanbul on Sunday after returning from a tour of Asia.

The bill will now go to parliament’s general assembly, where the AK Party has a strong majority, before being passed to President Abdullah Gul for approval, he said.

The beauty of democracy

Details of the corruption allegations have not been made public, but are believed to relate to construction and real estate projects and Turkey’s gold trade with Iran, according to Turkish newspaper reports, citing prosecutors’ documents.

The affair has exposed a deep rift within the political establishment, shaking markets, helping drive the lira to new lows, and prompting expressions of alarm from Washington and Brussels about threats to the credibility of the legal system.

Erdogan’s supporters see the graft inquiry as a smear campaign contrived by U.S.-based Islamic cleric Fethullah Gulen, who exercises broad, if covert, influence in the judiciary and police. They see the HSYK as dominated by Gulenists.

Gulen has denied orchestrating the investigation.

Ahmet Hamsici, deputy chairman of the HSYK, has said greater government control over the body responsible for naming judges and prosecutors would contravene the basic principle of the separation of powers.

The AK Party proposals could also roll back some of the steps taken in a 2010 referendum on constitutional reform, a package championed by the European Union and meant to bolster the independence of the HSYK.

The feud over the judiciary has diverted attention from the graft allegations themselves, although more than 10,000 people attended a rally in Ankara on Saturday to denounce corruption, waving placards with slogans including “Bye Bye Tayyip” and handing out fake dollar bills bearing Erdogan’s image.

Erdogan said that if President Gul approved the draft AK Party bill, as he is expected to do, the opposition could challenge it by going to the constitutional court.

“We would wait for the results of that,” Erdogan said.

“That is the beauty of democracy.”