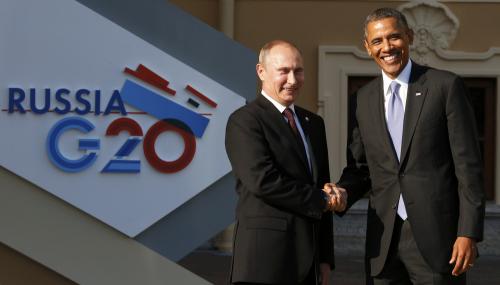 
World leaders pressure Obama over Syria at G20 summit
Reuters / Phuket Gazette
PHUKET: U.S. President Barack Obama faced growing pressure from Russia’s Vladimir Putin and other world leaders on Thursday to decide against launching military strikes in Syria, which many of them fear would hurt the global economy and push up oil prices.

At a summit of the Group of 20 (G20) developed and developing economies in St. Petersburg, Putin greeted Obama with a thin smile and a businesslike handshake, a clear sign of the strains between them over how to respond to a chemical weapons attack in Syria.

Obama also wore a stiff smile before talks began over dinner on the world economy and then on Syria, and there was none of the arm clutching or hugs between the two presidents that is typical of such occasions.

The rift over Syria overshadowed the discussions on how to revive growth but not before splits emerged within the group over a U.S. plan to wind down an economic stimulus program. The G20 accounts for two thirds of the world’s population and 90 percent of its output.

The first round at the summit went to Putin, as China, the European Union, the BRICS emerging economies and a letter from Pope Francis all warned of the dangers of military intervention in Syria without the approval of the U.N. Security Council.

“Military action would have a negative impact on the global economy, especially on the oil price – it will cause a hike in the oil price,” Chinese Vice Finance Minister Zhu Guangyao said.

United Nations Secretary-General Ban Ki-moon later told the leaders over the dinner in a tsarist-era seafront palace that any military action must have the Security Council’s backing.

“Let us remember: every day that we lose is a day when scores of innocent civilians die,” his office quoted him as saying. “There is no military solution.”

Obama blames forces loyal to Syrian President Bashar al-Assad for the August 21 poison gas attack in the Damascus suburbs that killed up to 1,400 people. Moscow says Obama has not proven that claim and says rebel forces may have carried it out.

In New York, U.S. Ambassador to the United Nations Samantha Power left no doubt that Washington had given up trying to work with the U.N. Security Council over the attack.

She said there was “no viable path forward in this Security Council” and accused Russia of holding it hostage. Moscow has signalled it would veto any resolution on the use of force unless Washington produced stronger proof.

Obama has asked the U.S. Congress to approve military action and France has said it is ready to support U.S. intervention.

Showing he was undeterred by the criticism, Obama said before talks with Japan’s prime minister on the sidelines of the summit that using chemical arms was “not only a tragedy but also a violation of international law that must be addressed.”

Aides said he would set out his views at the leaders’ dinner and hoped to build support for military action, although they acknowledged a consensus might be hard to find.

Long after midnight, there was still no word from officials on how the dinner discussion had gone.

Putin was isolated on Syria at a Group of Eight meeting in June, the last big summit of world powers, but could now turn the tables on Obama, who recently likened him to a “bored kid in the back of the classroom” who slouches at meetings.

Putin’s press secretary, Dmitry Peskov, portrayed the “camp of supporters of a strike on Syria” as divided, and said: “It is impossible to say that very many states support the idea of a military operation.”

German Chancellor Angela Merkel saw no chance of agreement between Putin and Obama on Syria. U.S.-Russian ties have long been strained by political differences but went into free fall when Russia harboured Edward Snowden, a former spy agency contractor who leaked details of U.S. intelligence programmes.

Any G20 decision on Syria would not be binding but Putin would like to see a consensus to avert military action in what would mark a significant – but unlikely – personal triumph for the Russian leader.

The G20 achieved unprecedented cooperation between developed and emerging nations to stave off economic collapse during the 2009 financial crisis, but the harmony has since waned.

Member states are at odds as the U.S. recovery gains pace, Europe lags, and developing economies worry about the impact of the Federal Reserve’s plans to stop a bond-buying programme that has helped kick-start the U.S. economy.

“Our main task is returning the global economy towards steady and balanced growth. This task has unfortunately not been resolved,” Putin said. “Therefore systemic risks, the conditions for an acute crisis relapse, persist.”

The BRICS agreed to commit $100 billion to a currency reserve pool that could help defend against a balance of payments crisis, although the mechanism will take time to set up.

There is likely to be an agreement on measures to fight tax evasion by multinational companies at the summit in the spectacular, 18th-century Peterhof palace complex, built on the orders of Tsar Peter the Great.

An initiative will be presented on refining regulation of the $630-trillion global market for financial derivatives to prevent a possible blow-up.

Steps to give the so-called “shadow banking” sector until 2015 to comply with new global rules will also be discussed.


Blast rattles Madagascar over election row
Reuters / Phuket Gazette
PHUKET: A makeshift bomb exploded at the entrance of a hotel in Madagascar’s capital on Thursday causing no casualties, police said, and a previously unknown group claimed responsibility telling foreigners to keep out of the nation’s elections.

The blast, though small, will raise tensions on the Indian Ocean island before a fraught presidential vote that has been pushed back for a third time till October 25 over a row about who can run, extending the country’s political crisis.

The former French colony has been in turmoil since President Andry Rajoelina seized power with military support in 2009, ousting former President Marc Ravalomanana and scaring off investors and tourists.

Both Rajoelina and Ravalomanana had reached a deal with regional states to restore order, based on the condition neither would run in the next vote.

But Rajoelina initially changed tack when Ravalomanana’s wife said she was running. The European Union, the United States and the African Union (AU) threatened to impose sanctions if the old candidates persisted in standing for office.

Germain Ratsirombahina, police chief in the capital Antananarivo, said the device went off outside the Hotel Plaza overnight, causing no injuries or damage.

In an email sent to at least one Western embassy, a previously unheard of group calling itself Defenders of the Nation’s Sovereignty said it was behind the blast.

“The Malagasy people will never accept the political manoeuvrings of certain nations aimed at suppressing (Malagasy) rights and freedom to chose their destiny,” it said.

It also said the nation would not accept a court ruling last month that barred Rajoelina, Ravalomanana’s wife and another former president, from running in the election, saying it did “not reflect the popular will”.