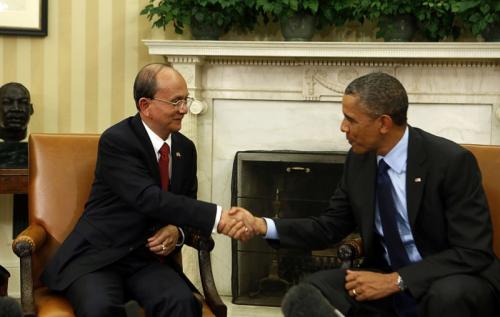 Thein Sein became the first head of Myanmar to visit the White House in 47 years, and he and Obama sat down for talks in the Oval Office.

Obama said the Myanmar leader had assured him that he intends to move forward on releasing more political prisoners and institutionalizing political reforms that have already taken place. Thein Sein also vowed to resolve ethnic conflicts by incorporating all communities into the political process, Obama said.

“I also shared with President Sein our deep concern about communal violence that has been directed at Muslim communities inside Myanmar. The displacement of people, the violence directed towards them needs to stop,” Obama said.

Sein, speaking through a translator, said his country faces a “daunting task” in carrying out reforms but said for democracy to flourish in Myanmar the reforms must be carried out in the years ahead.

Myanmar will need the “assistance and understanding” of the international community, including the United States, as it goes through the process, he said.

Rights groups and some U.S. lawmakers fear Obama has moved too quickly since forging a dramatic breakthrough in relations in 2011 after half a century of military rule in Myanmar, also known as Burma.

At least 192 people died last year in violence between Buddhists in Rakhine and Rohingya Muslims, who are denied citizenship by Myanmar. Most of the victims, and the 140,000 people made homeless in the attacks, were Muslims.


Monster tornado flattens suburb of Oklahoma City
Reuters / Phuket Gazette
PHUKET: A huge tornado with winds of up to 200 miles per hour (320 kph) devastated the Oklahoma City suburb of Moore on Monday, ripping up at least two elementary schools and a hospital and leaving a wake of tangled wreckage.

At least 51 people were killed, and rescue workers were looking for two dozen children unaccounted for at one of the schools. KFOR television, citing a reporter’s eyewitness account, and hospitals said dozens of people were injured as the dangerous storm system threatened as many as 10 U.S. states with more twisters.

Television video showed tracts of homes destroyed, cars tossed about and piled atop one another, and at least one building on fire.

Rescue workers pulled third-graders from the devastated Plaza Towers Elementary school in Moore, a KFOR television reporter said from the scene, and aerial video showed first responders sifting through the rubble left behind.

“I have never seen anything like this in my 18 years covering tornadoes here in Oklahoma City. This is without question the most horrific,” said Lance West, a reporter for KFOR.

Briarwood Elementary School, which also stood in the storm’s path, was all but destroyed. On the first floor, sections of walls had been peeled away, affording clear views into the building, while in other areas, cars hurled by the storm winds were lodged in the walls.

While the school was a wreck, nearby playground equipment stood undamaged, though littered with rubble.

Across the street, people picked through the remains of their homes, looking for any possessions they might salvage.

The National Weather Service assigned the twister a preliminary ranking of EF4 on the Enhanced Fujita Scale, meaning the second most powerful category of tornado with winds up to 200 mph (320 kph).

At least 45 people were injured, according to officials of four hospitals.

“They (injured) are coming in minute by minute,” said Integris Southwest Medical Center spokeswoman Brooke Cayot. Of the 19 injured there, seven were in critical condition, seven serious and five listed as fair or good, Cayot said.

“The whole city looks like a debris field,” Glenn Lewis, the mayor of Moore, told NBC.

“It looks like we have lost our hospital. I drove by there a while ago and it’s pretty much destroyed,” Lewis said.

The massive twister struck at the height of tornado season, and more were forecast. On Sunday, tornadoes killed two people and injured 39 in Oklahoma.

Witnesses said Monday’s tornado appeared more fierce than the giant twister that was among the dozens that tore up the region on May 3, 1999, killing more than 40 people and destroying thousands of homes. That tornado ranked as an EF5, meaning it had winds over 200 mph (320 kph).

The 1999 event ranks as the third-costliest tornado in U.S. history, having caused more than $1 billion in damage at the time, or more than $1.3 billion in today’s dollars. Only the devastating Joplin and Tuscaloosa tornadoes in 2011 were more costly.

The National Weather Service predicted a 10 percent chance of tornadoes in parts of Texas, Oklahoma, Arkansas, Kansas, Missouri and Illinois. It said parts of four other states – Wisconsin, Indiana, Michigan and Iowa – have a 5 percent risk of tornadoes.

The area at greatest risk includes Joplin, Missouri, which on Wednesday will mark two years since a massive tornado killed 161 people.

The latest tornado in Oklahoma came as the state was still recovering from a strong storm on Sunday with fist-sized hail and blinding rain.

Two men in their 70s died in the storm, including one at a mobile home park on the edge of the community of Bethel Acres near Oklahoma City, said Keli Cain, a spokeswoman for the Oklahoma Office of Emergency Management. Thirty-nine people were injured around the state as storms toppled trees and tore up rooftops, she said.

Several hundred homes and buildings were thought to have been damaged or destroyed and approximately 7,000 customers were left without power in Oklahoma. “There is definitely quite a bit of damage,” Cain said.

More than two dozen tornadoes were spotted in Iowa, Oklahoma, Kansas and Illinois, according to the National Oceanic and Atmospheric Administration and local news reports. Hail stones, some as large as baseballs, were reported from Georgia to Minnesota, NOAA said.

The tornado season in the United States had been unusually quiet until last week, when a tornado struck the town of Granbury, Texas, killing six people.