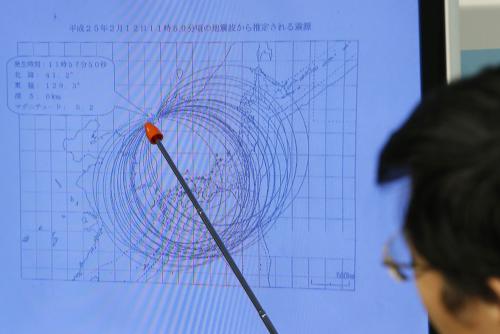 Earlier UN’s Comprehensive Nuclear-Test-Ban Treaty Organization said North Korea was suspected to have carried out its third atomic test after a seismic shock was registered.

An earthquake in North Korea that appeared to be an explosion happened in the same area as two previous nuclear tests, said Tibor Toth, the organisation’s executive secretary said.

“The event shows clear explosion-like characteristics and its location is roughly congruent with the 2006 and 2009 DPRK nuclear tests,” he said in Vienna, using the official acronym of the Democratic People’s Republic of Korea.

The United States told Japan on Monday that Pyongyang would conduct a nuclear test in the near term, he added.

North Korea tested atomic weapons in 2006 and 2009. A third test had been expected. The secretive state in January said that it planned a further atomic and rocket tests in protest at expanded United Nations sanctions. It did not specify when any tests would take place.

The UN sanctions were imposed following the test launch of arocket by the North in December.

One Western diplomat said he hoped the council would approve an initial statement condemning the nuclear test and begin work on a more comprehensive council reaction.

Diplomats had said previously that the United States, South Korea and European members would want the Security Council to adopt a resolution that would impose new sanctions on Pyongyang in the event of a third nuclear test in defiance of earlier council resolutions. North Korea carried out nuclear tests in 2006 and 2009.

Getting approval on a council resolution, however, could take weeks. While China had made clear its opposition to a new North Korean nuclear test, council diplomats say Pyongyang’s ally Beijing could be expected to put up some resistance to tough new sanctions to avoid angering North Korea.

Last month the 15-nation council adopted a resolution that tightened existing sanctions against Pyongyang in response to its December rocket launch. That resolution took a month to agree.

South Korea is the president of the Security Council this month.

PHUKET: Israeli Prime Minister Benjamin Netanyahu yesterday said that new centrifuges Iran was installing for its uranium enrichment programme could cut by a third the time needed to create a nuclear bomb.

As Iran and world powers prepare to resume talks aimed at easing a dispute that has raised fears of a new Middle East war, Tehran announced late last month it planned to install the new machines at its main enrichment plant.

The move underlined Iran’s defiance of international demands to scale back the uranium enrichment which Tehran says is for civilian purposes but which could also potentially be used to make material for atomic bombs.

Netanyahu touched on the subject in an address to American Jewish leaders and his words came ahead of a planned visit to Israel next month by President Barack Obama.

“Iran’s … nuclear weapons programme continues unabated … I drew a line at the U.N. last time I was there,” Netanyahu said. “They haven’t crossed that line but what they are doing is to shorten the time that it will take them to cross that line and the way they are (doing it) is by putting in new, faster centrifuges that cut the time by one third.”

In a speech to the U.N. General Assembly in September, Netanyahu gave a rough deadline of summer 2013 as the date by which Iran could have enough highly enriched material to produce a single nuclear bomb.