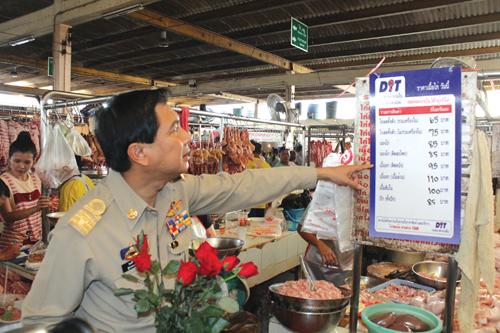 PHUKET: The head of the Department of Internal Trade (DIT) Phuket Office said that the 300 baht daily minimum wage has contributed to market inflation ahead of the Chinese New Year festivities.

“Of course it [the minimum wage rise] is one factor that will affect prices for the end users – the consumers,” she said.

However, Ms Supacha added that another important factor that needs to be considered is the fundamental market rule of ‘supply and demand’: “Due to the Chinese New Year, there has been an increased demand, and thus reduced supply of many types of produce in the market, which is another reason why prices have increased.”

“There is no way we can tell at this point. It all depends on the vendors, their supplies and the demand for produce,” she emphasized.

Recently the Gazette reported that a market vendor at the busy Kaset Market in Phuket Town had told the Phuket Governor that the new minimum wage, effective nationwide as of January 1, was forcing vendors to pass on price hikes of fresh produce.

The purpose of the visit was to ensure against gouging ahead of the Chinese New Year festivities, which begin on February 10.

During his walk-through of the market, Governor Maitri noted that vegetable prices were on the rise. “Most vegetables have jumped 5 to 10 baht. Kale and Chinese kale were 25 baht per kilogram, now they are 35 baht per kilo,” he remarked.

“Fruit prices are increasing, too – especially oranges, as they are believed to be auspicious during Chinese New Year. Oranges are now 5 baht more a kilo. They were 75 baht, but are now 80 baht per kilogram. The price of green apples has also jumped, to 18 baht each; before they were 15 baht apiece,” he said.

Gov Maitri predicted the prices of other fruits to follow suit, notably fruits used as auspicious offerings during Chinese New Year ceremonies, such as bananas, pears and grapes

To this, fruit vendor Sakorn Ngarnwongpanit countered, “So far, only orange and apple prices have increased for the coming Chinese New Year, but it is like this every year – prices rise in response to rising demand.”

Non-vegans have also been hit by rising meat prices, the governor noted.

“Pork has increased by 10 baht, and is now 130 baht per kilogram, but the price of chicken has yet to increase,” Governor Maitri said.

Pork vendor Choompol Sae-Ng blamed the 300-baht minimum daily wage set by the government as the reason for the price of raw meat rising.

“A lot of people are complaining about the price of food going up, and saying that they have to buy it even if the prices go up. But it is because of the 300-baht minimum wage set by the government. The cost of production has increased, and so have the prices,” he said.

Mr Choompol warned that further price rises may be on their way, and that vendors will be forced to pass on to consumers any markups made by produce suppliers.

“We are keeping an eye on the prices. If pig farms raise their prices, then we will have to raise ours, too,” he said.

Relief ahead
While many consumers’ pocket books, if not food pantries, will take a major blow during the festivities, there is some relief on the way.

The DIT-Phuket Office announced that the Phuket City District (Amphoe Muang) will be holding its annual ‘cheap goods’ fair from February 28 to March 3.

Dubbed by the government the “Blue Flag Fair”, this once-a-year, district-level flea market will be held this year in the area of Sripuwanat Park in Wichit, located opposite of the Laem Chan health clinic in Wichit sub-district of Phuket Town.

Popular among low-to-medium income households, as well as food vendors the island over, the fair will host a select number of vendors selling food, clothes and other consumer goods at below-market-value prices.

DIT-Phuket chief Supacha Bunthalit told the Gazette that this year’s fair will feature a total of 34 tents with 70 booths in total.

“The vendors will be selling all kinds of living essentials, including eggs, chicken, vegetables, coffee, rice, fruit and many others.

“The goods aren’t necessarily subsidized by the government, but the vendors who register with us all agree to reduce their prices by 10 to 20% from the central price [recommendations], ” she explained.

Ms Supacha noted that this year’s fair is slightly smaller than last year’s, which was held in July and attracted about 80 vendors.

Chief Supacha noted that the Blue Flag Fair for Kathu district was held last month, while the respective fair for Thalang district is scheduled to be held in April.

“People looking to reduce the high cost-of-living burden should not miss out. Also, we are still accepting vendor registrations from anybody who is willing to sell daily essential goods for 10 to 20% lower than the central price… Approved vendors can reserve a booth free of charge for the entirety of the three day event.”

To register for or inquire about the Blue Flag Fair, contact the DIT-Phuket office on 076-219-516.

Phuket Business: Not in front of the children

Myanmar urges expedited processing of its migrant workers in Thailand