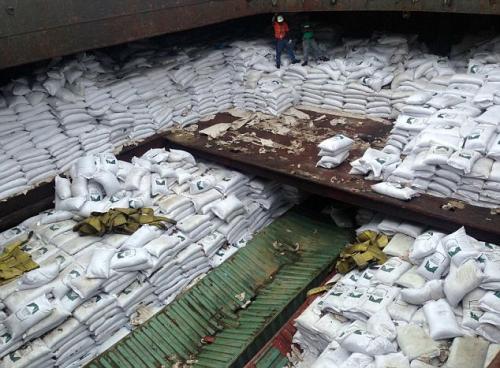 
North Korean ship caught carrying weapons through Panama
Reuters / Phuket Gazette
PHUKET: Panamanian authorities might take up to a week to search a North Korean cargo ship that was seized last Wednesday on suspicion that the vessel was hiding missile equipment in a shipment of brown sugar from Cuba.

Panama seized the ship after a standoff in which the ship’s captain tried to slit his own throat. They stopped the ship last week as it headed into the Panama Canal. Authorities arrested the crew on Monday after finding undeclared missile-shaped objects – a potential violation of U.N. sanctions linked to North Korea’s nuclear program.

“We found containers which presumably contain sophisticated missile equipment. That is not allowed. The Panama canal is a canal of peace, not war,” Panama’s President Ricardo Martinelli told local radio on Tuesday.

A photo posted on Martinelli’s Twitter page showed a long, green missile-shaped object with a tapering, conical end inside the ship, which he said was bound for North Korea.

The U.S. State Department praised Panama’s decision to raid the ship, which it said had a history of involvement in drug smuggling, and warned that the vessel would be violating United Nations Security Council resolutions by shipping arms.

The United Nations has imposed a raft of sanctions on North Korea, including strict regulations on arms shipments, for flouting measures aimed at curbing its nuclear weapons program.

He did not specify whether the cargo contained actual missiles but said the search could last up to a week.

When Panamanian officials began looking inside containers stuffed with over 250,000 100-kilogram (220-pound) bags of brown sugar, the captain became violent, Mulino said. The captain, a North Korean citizen like the crew, tried to slit his throat with a knife, a police official said. The man was in hospital in stable condition, the official added, speaking on condition of anonymity.

Ben Rhode, a North Korea security expert at Harvard’s Kennedy School of Government, suggested the captain’s suicide attempt might have been an effort to escape severe punishment by officials in North Korea for failing to carry out his mission.

All 35 members of the crew of the ship, which is called Chong Chon Gang, were arrested after resisting Panamanian orders and are now being questioned at Fort Sherman, a former U.S. Army Base on the Atlantic, the official added.

Mulino, the security minister, said that Panama would consult with the United Nations to determine which agency could charge the crew members for smuggling illegal weapons.

An official at North Korea’s U.N. mission said nobody was available to comment on the ship.

IHS Jane, a global analytics firm, said it had identified the equipment shown in the images as an SNR-75 ‘Fan Song’ fire control radar for the SA-2 family of surface-to-air missiles.

The radar, built by Russian weapons manufacturer Almaz-Antey and first used during the Vietnam war, has been credited with destroying many Western aircraft, according to Air Power Australia, a defense think tank.

More recently, the relatively cheap and simple system has been put to use in the Middle East and Africa.

Carlo Kopp of Air Power Australia said as China was manufacturing the SNR-75 up until the end of the 1980s, North Korea likely already had the radars in its stockpile.

A U.S. official said the most likely explanation for the cargo was that Cuba was sending missile system parts to North Korea for an upgrade, and sending sugar with them to pay for the work. A security official said Panama had asked U.S. experts to help inspect and identify the weapons.

Cuban government officials declined comment on the incident, which drew a stinging response from some U.S. critics of the island’s Communist leadership.

U.S. Representative Ileana Ros-Lehtinen, the Florida Republican who heads the House subcommittee on the Middle East and North Africa, called on President Barack Obama’s administration to cancel migration talks with Cuba this week.

North Korea is under wide-ranging sanctions enacted by the United Nations, the United States and the European Union, including a U.N. ban on all arms exports, due to its nuclear program.

“Shipments of arms or related materiel to and from (North) Korea would violate Security Council resolutions, three of them as a matter of fact,” said U.S. Ambassador Rosemary DiCarlo, president of the U.N. Security Council this month.

“Obviously this shipment, if it’s confirmed to have what we suspect, would be of interest to the (U.N. North Korea) sanctions committee,” she told reporters in New York.

Previous violations of sanctions included North Korean shipments of arms-related material to Syria in November 2010 and rocket fuses for Iran in 2008.

The ship, built in 1977, was tracked leaving Port Vostochny, in Russia’s far east, on April 12, according to Lloyd’s List Intelligence, a maritime intelligence company. It was next registered arriving in Balboa, on the Panama Canal’s Pacific side, on May 31, and crossed the waterway the next day heading for Havana.

It then disappeared from the tracking system and reappeared in Manzanillo, Panama, on July 11, according to shipping data obtained by research group IHS Maritime. IHS said there were indications it had changed cargo in the interim.

In 2010, the Chong Chon Gang was stopped by Ukrainian authorities who found small-arms ammunition and narcotics aboard the vessel, according to Hugh Griffiths, an arms trafficking expert at the Stockholm International Peace Research Institute.

A year earlier, the ship had stopped in Tartus, Syria, home to a Russian naval base, Griffiths added.


Gay marriage to be legal in England as law clears last hurdle
Reuters / Phuket Gazette
PHUKET: Gay marriage is to become legal in England and Wales after the lower house of the British parliament approved the final changes on Tuesday to a law that had Prime Minister David Cameron’s backing but split his ruling Conservative party.

The law had the support of both Labour and the Lib Dems, Britain’s two other main political parties, but damaged Cameron’s standing within his own party with many of his own MPs criticising him for being too liberal.

His own MPs had previously twice voted against it.

After a two-hour debate, the Commons passed the bill, meaning it now only needs to be approved by the Queen, a formality.

“The title of this bill might be ‘Marriage’, but its fabric is about freedom and respect,” said Culture Secretary Maria Miller, adding that traditionalists should not feel their concept of marriage had been undermined.

“Freedom to marry regardless of sexuality or gender, but also freedom to believe that marriage should be of one man and one woman, and not be marginalised,” she said.

The prime minister personally endorsed the bill to try to show his party was progressive, but that upset some Conservatives who said their Christian beliefs led