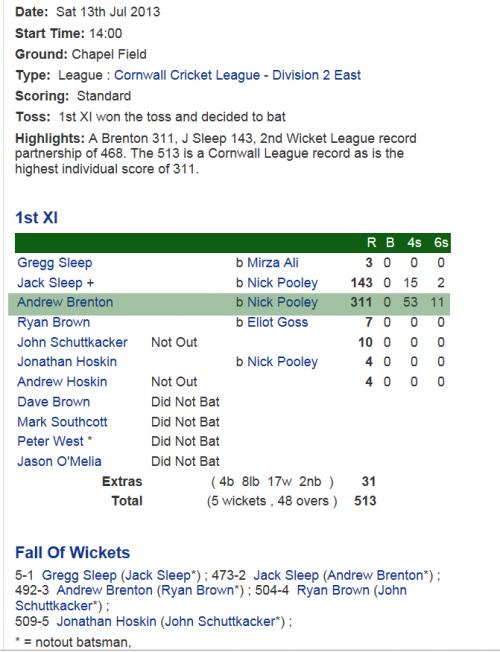 PHUKET: A self-employed builder from Cornwall in south-west England hit 311 runs from 40 overs to help his club to a regional record scoreline yesterday, at a strike rate of 130.

The BBC reported that Andrew Brenton lashed 53 boundaries, with 11 sixes, after coming in at number three for Luckett against Tideford and recording the highest score in Cornish cricket history (click here for scorecard).

His tally helped Luckett reach 513 for five off 48 overs, another Cornish record, to win the Division Two East match by 313 runs after Tideford made 210 for six in reply.

“Andrew’s a really down-to-earth guy – we had to drag him out to pose for the photo next to the scoreboard,” the BBC quoted club official Ian Roberts as saying.

“He’s just a very good cricketer and I’m sure he could play at a higher level and get paid for his troubles but he just wants to play with his mates at Luckett – that’s Andrew all over.

Sumatra quake gives Phuket ‘a little shake’, nothing to fear