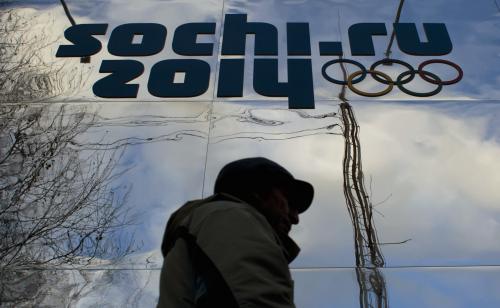 
Militant Islamist video threatens Winter Olympics
Reuters / Phuket Gazette
PHUKET: Two men said by Islamist militants to have carried out suicide attacks in south Russia appeared in a video donning explosive belts and warning Vladimir Putin to expect a “present” at the Sochi Winter Olympics from fighters following after them.

The video was posted by a group identifying itself as Vilayat Dagestan and appeared on a website often used by militants from Russia’s northern Caucasus region where Moscow has been battling insurgency for over a decade. It could not be independently corroborated.

The video said the two men, named only as Suleiman and Abdulrakhman and posing also with assault rifles in front of a banner with Arabic writing, were the suicide bombers who attacked the city of Volgograd last month killing at least 34.

One, who is bearded, reads a statement in Russian to the wailing of a song in Arabic. The video shows them having what appear to be explosive devices attached to them and one pushing a button that nestles in his hand and appears to be a trigger.

“We have prepared a … present for you, for you (President Putin) and all those tourists who will come over,” their statement says.

“If you hold the Olympics you will receive a present from us. It will be for all the Muslim blood that is shed every day around the world, be it in Afghanistan, Somalia, Syria, all around the world. This will be our revenge.”

Putin has staked much personal and political prestige on the Games, which are expected to cost Russia more than $50 billion and are intended to show how far the country has come since the collapse of the communist Soviet Union in 1991.

He has also launched a huge security operation around Sochi that involves about 37,000 security personnel and has tightened security nationwide. Carrying out an attack in the Sochi area could be exceptionally difficult, but some fear provincial cities, or even Moscow, might be more vulnerable.

Vilayat Dagestan, which says it is affiliated to a faction in Iraq known as Ansar al-Sunna, gave no other details of the two men. It is the first group to claim responsibility for the Volgograd bombings of a train station and a trolleybus.

There was no immediate comment from the Russian authorities on the video, which lasts 49 minutes.

Dagestan is a mainly Muslim province at the heart of the insurgency to create an Islamist state in the North Caucasus and is racked by almost daily violence.

Doku Umarov, a militant leader, urged the insurgents last July to attack the Games in Sochi, which lies on the western edge of the Caucasus mountains.

The pro-Moscow leader of Russia’s Chechnya region, which is also in the North Caucasus, said last week he believed Umarov was dead but that his body had not been found. Security sources did not confirm his comments.

Putin told Russian and foreign reporters in comments broadcast on Sunday that Russia had a “perfect understanding” of the security threat to the games, starting February 7, and how to combat it.

Some U.S. lawmakers said on Sunday Russia’s security services had not fully shared information that U.S. officials need to protect American athletes in the Games and that cooperation on security could be better.