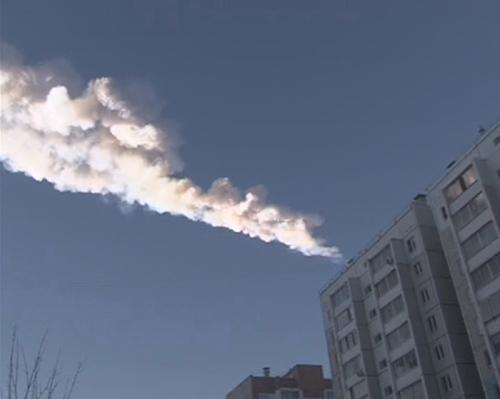 PHUKET: About 400 people were injured when a meteorite shot across the sky in central Russia today sending fireballs crashing to Earth, smashing windows and setting off car alarms.

Residents on their way to work in Chelyabinsk heard what sounded like an explosion, saw a bright light and then felt a shockwave, according to a Reuters correspondent in the industrial city 1,500 km (950 miles) east of Moscow.

The meteorite raced across the horizon, leaving a long white trail in its wake which could be seen as far as 200 km (125 miles) away in Yekaterinburg. Car alarms went off, windows shattered and mobile phones worked only intermittently.

“I was driving to work, it was quite dark, but it suddenly became bright. I felt like I was blinded by headlights,” said Viktor Prokofiev, 36, a resident of Yekaterinburg in the Urals Mountains.

No fatalities were reported but President Vladimir Putin, who was due to host Finance Ministry officials from the Group of 20 nations in Moscow, and Prime Minister Dmitry Medvedev were informed.

A local ministry official said the meteor shower may have been connected with an asteroid the size of an Olympic swimming pool that was due to pass Earth at a distance of 27,520 km (17,100 miles) but this could not be confirmed.

Windows were shattered on Chelyabinsk’s central Lenin Street and some of the frames of shop fronts buckled.

A loud noise, resembling an explosion, rang out at around 9.20 a.m. (12:20pm Phuket time). The shockwave could be felt in apartment buildings in the industrial city’s centre.

“I was standing at a bus stop, seeing off my girlfriend,” said Andrei, a local resident who did not give his second name. “Then there was a flash and I saw a trail of smoke across the sky and felt a shockwave that smashed windows.”

A wall was damaged at the Chelyabinsk Zinc Plant but there was no environmental threat, a plant spokeswoman said.

The Emergencies Ministry described today’s events as a “meteor shower in the form of fireballs” and said background radiation levels were normal. It urged residents not to panic.

Chelyabinsk city authorities urged people to stay indoors unless they needed to pick up their children from schools and kindergartens. They said a blast had been heard at an altitude of 10,000 metres (32,800 feet), apparently signalling it occurred when the meteorite entered Earth’s atmosphere.

The US space agency NASA has said an asteroid known as 2012 DA14 (click here for more information), about 46 metres in diameter, would have an encounter with Earth closer today (2:26am tomorrow morning in Phuket) than any asteroid since scientists began routinely monitoring them about 15 years ago.

Television, weather and communications satellites fly about 500 miles (800 km) higher. The moon is 14 times farther away.